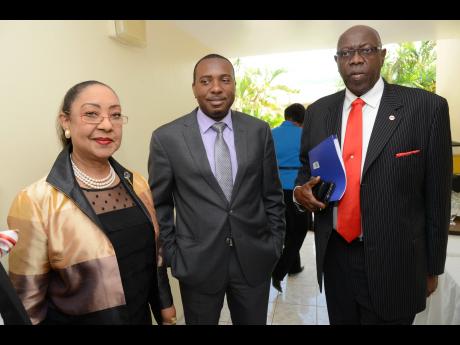 Rudolph Brown
From left: Marion Bullock DuCasse, director of emergency, disaster management and special services in the health ministry; Dr Kevin Harvey, permanent secretary in the Ministry of Health; and Health Minister Dr Fenton Ferguson about to brief the media on the outbreak of klebsiella and serratia on October 20.

A Jamaica-trained, United States-based neonatologist has described the deaths of the 19 babies in two local hospitals as heartbreaking, while arguing that "it is quite possible that without the bacteria, the doctors at the hospitals would have worked magic to keep the infants alive".

Winslade Bowen, who is based in Florida, told The Sunday Gleaner that the deaths of the babies, whose underdeveloped and fragile bodies were devastated by klebsiella and serratia bacteria at two of the country's top hospitals, was an unspeakable, painful tragedy.

"My heart is full and broken over this whole matter. As a Jamaica-trained doctor, I weep over this. Here am I in another country offering my services, and my country is bleeding from this painful tragedy," said Bowen, who, as a neonatologist, would have had at least four years of medical school, three years of residency training in general paediatrics, and three years of additional training in newborn intensive care.

He argued that if he were based in Jamaica, it is very possible that he would have been directly involved with the day-to-day care of the babies.

"It is very painful for me, right now," said Bowen. "The death of a child is a heart-rending event by any measure and under any circumstance. The families and loved ones of these dear children deserve all the support and love that can be offered.

"Needless to say, trite responses are callous and may, in fact, betray a lack of regard for human life. I sincerely hope that none of these responses came from any of my fellow alumni of the Faculty of Medical Sciences at UWI (University of the West Indies)," added Bowen, as he expressed a desire to return home.

Bowen, who was born at the Victoria Jubilee Hospital, attended Jamaica College before his medical training at the UWI. He said he was in medical school with Dr Allison Nicholson, senior microbiologist at the University Hospital of the West Indies (UHWI).

"I have worked in a level-three facility for most of my life. Level one is like a regular nursery. Level two mildly to moderately ill babies who do not require ventilatory support for more than 24 hours and would not be premature less than 32 weeks.

"Level three are babies born less than 30 weeks, weighing less than 1,000 grams (2.2 pounds), requiring protracted ventilatory support and other forms of life support, 24-hour monitoring, seven days each week, and extremely premature infants, who could be as premature as 23 weeks, or six months pregnant.

"The bread and butter of what we do is actually to take care of these infants," declared Bowen.

He noted that at level three, the prematurity of the babies could present with widespread issues.

According to Bowen, a level-four facility would include babies presenting with all of the previously mentioned symptoms, plus the need for paediatric cardiac surgery or extreme life support, where an external system oxygenates their blood for re-absorption.

Bowen told The Sunday Gleaner that he suspects the UHWI may only have the capabilities for level-three babies, even though some would present with level-four needs.

He said three years ago, he was involved in the donation of some equipment to the neonatal unit at the UHWI and learnt of the "extreme challenges facing the medical professionals there".

"It is tough when you do not have the resources to provide the things that are needed to this unique segment of the paediatric population, who have immature respiratory and immune systems, who are susceptible to infections, and who have to be handled consistently.

"They have a lot of interface with individuals and machines," he explained.

Bowen noted that because of the consistent support that these babies need, "cleanliness is critical to every breath taken by these children".

"If there is one thing you must choose if resources are scarce, it's handwashing. Here, soap and handwashing facility is everywhere. When you are handling children this delicate, if you have to wash your hands 100 times per day, wash it. Klebsiella can be transmitted that way (dirty hands). You must trim you nails and wash your hands. I cannot overemphasise that," said Bowen.

Shortages of basic items, including cleaning agents in the hospitals, have been raised publicly and privately by medical officials.

At that time, Dawes warned of the dangers to patients as medical personnel had to become experts at improvisation. Dawes has since left the public sector.

Bowen said it was possible that klebsiella was imported to the hospital, even as he questioned if any of the infants presented a condition known as necrotising enterocolitis - a breakdown of the gut tissue that could have caused klebsiella to invade and produce the infection.

He said the babies could also have been infected through the ventilation system.

"Serratia is renowned for living in equipment. If the babies are on ventilators and the system is infected, they are going to be infected," he stated.

According to Bowen, several years ago, there was a serratia outbreak involving babies in the hospital he works, and it was determined that it was spread though the vacuum-cleaning of the contaminated carpet in the nursery.

He urged local health officials to "cultivate cleanliness, excellence and safety", and suggested "a regular review of morbidity and mortality among this group as trends may indicate the need for pre-emptive action".

So far, two officers of the UHWI - CEO Dr Cecil White and Medical Chief of Staff Professor Trevor McCartney - have resigned in the wake of the deaths of the babies at that hospital and the St James-based Cornwall Regional Hospital.

Questions have also been raised about the time taken by senior officials in the health ministry to respond after the first death linked to klebsiella and serratia was reported.