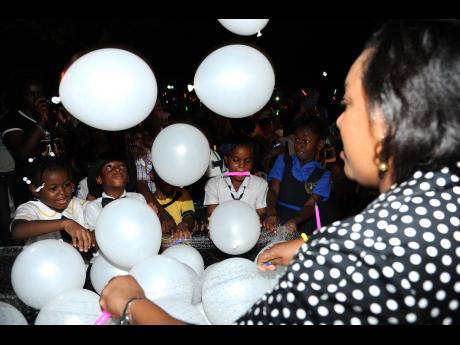 Ricardo Makyn
Ricardo Makyn/Staff Photographer Chief Executive Officer of the Child Development Agency (CDA), Rosalee Gage-Grey (right) releases balloons with a group od children to signify the number of children killed in 2015, at the CDA's candlelight vigil and concert held at the St William Grant Park, in Kingston on Thursday.

It was a time of reflection and meditation as the Child Develop-ment Agency (CDA) hosted a vigil and concert in recognition of World Day for the Prevention of Child Abuse at the St William Grant Park in downtown Kingston on Thursday.

Making reference to information she received from the Jamaica Constabulary Force (JCF), which indicates that 75 children have been killed since October 2014, CDA boss Rosalee Gage-Grey urged persons to be responsible and make child protection their priority.

"These deaths underscore the message the CDA has been pushing that the care and protection of our children have to be a priority. Children need love and care. Our desire is that everyone will take the message wherever they go.

"It is incumbent upon all of us to take a stand against the exploitation and neglect of our children. We must be decisive in our actions to keep the children safe. Our children have the right to be free and play outside without fear," she continued.

"We are so pleased to see that Jamaica is stepping up to protect the nation's children. Earlier this week, we saw the gathering of police officers here in Kingston to witness on paper and in practice the Child Interaction Policy, which sets out the framework for positive interaction between police and children if they find themselves in conflict with the law," the UN representative said.

" ... We will [next] be looking at how we can all work together to protect children in cyberspace - on the Internet and other social platforms - against bullying and mechanisms that seek to lure children into situations of abuse," she said.

"Children are protected against abuse by several pieces of legislation in Jamaica. However, we note with great concern that corporal punish-ment remains lawful in homes and schools. Corporal punishment, abuse, sexual exploitation, and neglect should never be a part of a child's life."