Government to roll out national shelter policy for abused women 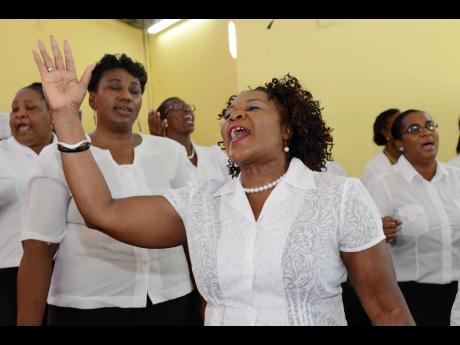 Rudolph Brown
Members of the church choir sing at the commemorative thanksgiving service to launch the Observance of International Day for the Elimination of Violence Against Women at the Boulevard Baptist Church on Washington Boulevard in St Andrew yesterday.

The Government is to begin rolling out a national shelter policy for abused women.

The announcement was made by de facto Information Minister Senator Sandrea Falconer during a church service to mark the observance of International Day for the Elimination of Violence Against Women, which will be celebrated later this week.

Falconer, who brought greetings on behalf of Prime Minister Portia Simpson Miller, said, "The Government has embarked on a national shelter policy for victims of domestic violence."

According to Falconer, the policy will see to the establishment of several shelters across the island that will cater to women who have been abused.

Falconer pointed out that the Church would play a critical role in the shelter policy as select churches would serve as centres where abused women could seek shelter, and assistance should they become victims of domestic abuse.

The minister also announced that the Bureau of Women's Affairs would be rolling out a three-month social media campaign to address the issue of violence against women.

"Commencing November 25, and during the 16 days of activism against gender-based violence, the Bureau of Women's Affairs, in partnership with a wide range of critical stakeholders, will engage our citizens across the length and breadth of the country through a social media campaign, which will run for three months," she said.

Some objectives of the campaign include facilitating constructive conversations on strategies to eliminate violence against women and children; creating an inclusive platform to engage a wide cross-section of stakeholders from the public and private sectors; and to engaging boys and men as advocates and agents of change to challenge harmful socio-cultural norms and gender stereotypes.