Billions for visas - Jamaicans spend big to get to the US 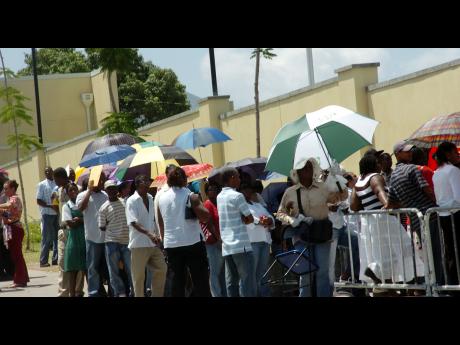 Norman Grindley
Desperate for a US visa, Jamaicans once braved the heat of the sun to wait on their appointment. The US Embassy has since introduced measures to make the wait a more pleasant experience. 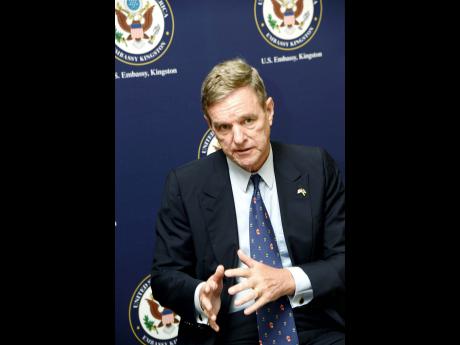 The United States (US) Embassy in Kingston has confirmed that Jamaicans spent US$25 million (approximately J$3 billion) this year in application fees for visas to enter that country.

That is almost twice the estimated J$1.5 billion secondary schools would pull in if every parent paid the controversial auxiliary fees.

Consul General at the US Embassy in Kingston Michael R. Schimmel last Friday disclosed that 159,000 visa applications were submitted to the entity, the most in 20 years.

But Schimmel downplayed the significance of the amount shelled out by Jamaicans to apply for visas.

"You multiply 160 by the number and we got US$25 million, but the individual application is still US$160," he stressed.

"It's a 10-year visa. If you travel once every 10 years to the US, each application would cost only US$16," said Schimmel as he pointed out that the cost for the visa is computed by the General Accounting Office in the United States to cover the cost of the service.

He said the embassy in Kingston is yet to determine what caused the significant increase in visa applications.

"We sat down and tried to analyse that. You can come at it from two different perspectives," said Schimmel.

In the first scenario, Schimmel said it could be that the economies in both countries are booming.

"Jamaica has enough money to travel and the Americans have enough money to host. Or you can say that the economy in the sending country is a little bit shaky, with some people looking for a way to get out and go to the United States," added Schimmel, even as he suggested that it was a combination of both.

He argued that the US economy is picking up, perhaps not as dramatic a recovery as some would hope.

"But certainly, the unemployment rates are down and people probably have more disposable income that enables them to host more readily and more comfortably," said Schimmel.

As for Jamaica, Schimmel suggested that the country is encountering stability.

"So I would not be able to say whether this represents a surge in spending power among Jamaicans."

Schimmel also listed what he characterised as a very active outreach campaign being undertaken by the US Embassy in Kingston for the spike in visa applications.

"I think [when] people are made aware of the statistics I am sharing, that may even generate more applications, which is a good thing," he declared.

"We want legitimate travellers to know that they are welcome and so I believe it is in great part due to the outreach campaign, but also to the improving economy as well."

That means Jamaicans who were not granted a visa spent more than J$1 billion in application fees.

"In 2015, we had a significant number of people coming in who had applied once or twice in the past, and they thought they could try again, believing that the standards might have changed," said Schimmel

He said this is positive in the sense that persons who have failed before are encouraged to retry if they have improved their chances.

"But in some of these instances, it wasn't the case, so they misunderstood the process. So I am not too surprised that the number [of rejections] went up in the course of one year to the next, but there are no scientific explanation."

Schimmel dismissed what he described as the popular belief that the US Embassy has a daily quota of visas for approval.

"So if we are seeing 1,000 people on a given day, the rule might be in the public perception, that 'they are going to approve only 800 of us', but that's not true, we would like to approve every applicant ... ."

In the meantime, public affairs officer at the US Embassy, Joshua Polacheck, noted that the standard that is applied to the visa application process - the Natural Immigration Act - has not changed since the early 1980s.