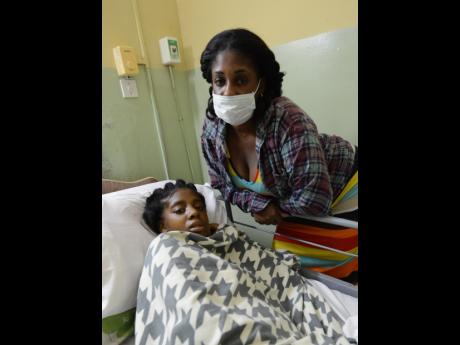 Ricardo Makyn
Chanise Kiffin (in bed) with her mother, Rosalee James, at the University Hospital of the West Indies last Friday. Kiffin died in the United States, where she had gone for medical attention.

Twenty-two-year-old Chanise Kiffin, the University of Technology (UTech) student whose story of bravery and determination to overcome earned her national support, has died, leaving her family and friends reeling.

Her brother, Nicholas Campbell, told The Gleaner last night that his sister died at a Maryland health facility in the United States (US) on Friday, days after arriving there for a surgery to treat her aplastic anaemia.

"We're in shock; some people in denial, some people in shock. I don't ... ," he said, his voice trailing off in an interview with The Gleaner. He added that "our family is very close. She's right in our circle, so it's very hard. It nuh easy man, none at all."

Aplastic anaemia is a deficiency of all types of blood cells caused by failure of bone marrow development.

Rosalee James told The Gleaner that her daughter's last word was, 'Mommy', which was followed by a weak attempt at a hug on Thursday. The next day, she got a wink from Chanise, who she said was scared.

"To see her like that, not expecting anything like that ... . It was really painful," the distraught mother said.

Campbell explained that Kiffin arrived in the US on January 18, a day before her scheduled surgery. Things, however, took a dramatic turn that same day as she experienced a seizure.

"After she had the seizure, she was not talking clearly. Her words were jumbled. You'd ask her what's her name and she would give somebody else's name," he said.

Kiffin was admitted immediately to the health facility, where a full-body scan was done, and, according to Campbell, it revealed that his sister was suffering from an infection that was "throughout her body and spreading in her brain".

"They gave her an antibiotic treatment, but they said it was too late," Campbell said.

Kiffin's January 19 surgery was delayed. Her lungs later collapsed and she had to be placed on life support. She died on Friday.

James, who accompanied Chanise and was hospitalised after witnessing her transition, remains in the US.

Earlier this month, while appealing for assistance for what should have been a six-month stay, James said of her daughter: "I've always admired Chanise. There was no father around, but she still managed to rise above the challenges. I am a firm believer in God, though, and I believe that all of this is for a reason."

Prior to leaving for the US, Kiffin was hospitalised at the University Hospital of the West Indies in St Andrew. She started her studies at UTech in 2011 and had hopes of being in the graduating class of 2016.

Kiffin, who lost a child during her ordeal, told The Gleaner ahead of her US visit that "I do feel discouraged sometimes. Sometimes I wonder if my life is on pause and if I will ever be able to get back on track. What I have been doing is reading my Bible more often and praying often so that I can cope each day because there are days when I feel very sad."

Remembering her daughter, James said, "To me she was great. She gave me something to live for when she was alive.

"I was proud of her (and) I told her that when I saw that she was going because the doctors told me that she couldn't hear what I'm saying. She always says that she is scared (of dying). I guess maybe she did feel something, but I told her not to be scared because God is there with her. She was seeking God for a long while."