Plan under way to put out bush fires before they start 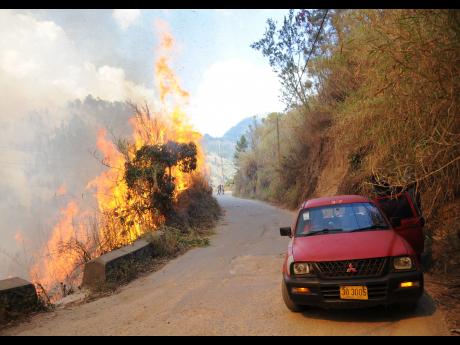 Ricardo Makyn
In this May 2015 photo, a raging fire is seen along the roadside in Guava Ridge on the Mavis Bank main road in East Rural St Andrew.

It is expected that there will be a drastic decrease in the number of bush fires that occur frequently during the dry season in Jamaica.

This is because the Meteoro-logical Service of Jamaica is embarking on an initiative with the Jamaica Fire Brigade to identify fire triggers to facilitate early warning and preparation.

In previous years, several hectares of forest have been damaged as a result of the spate of forest fires primarily in the Mavis Bank community in St Andrew and parts of St Thomas.

Glenroy Brown, meteoro-logical technician at the Meteorological Service of Jamaica, who was at the Climate and Weather Forecasting Training held in Barbados on Wednesday, explained that though the prediction is that the drought will subside, there is need for more work to mitigate against the devastating effects of forest fires.

The training was hosted by the Barbados-based Caribbean Institute of Meteorology and Hydrology.

"There are certain threshold values that would trigger bush fires, and so the plan is once we pick up those indicators, we would send out early warnings to the fire department, in addition to residents who live in these vulnerable communities," he said.

"The aim is to implement a system where we can indicate to the fire department and members of communities what will be happening. It's a daily monitoring of temperature, rainfall, and evapotranspiration; however, at the end of the day, we want to design something that is easy to understand. A team is currently working on it," he continued.

He also told The Gleaner that coffee farmers, in particular, would begin to see changes in the quality of their yields due to work being done to improve weather forecasting.

"On a yearly basis, there is what is called the coffee leaf rust (coffee disease) and what it does is reduce the yields and affect revenues significantly. What we want to do is provide some sort of early warning system, where we would monitor what will be happening," Brown told The Gleaner.

"What this will do is explore whether there will be an outbreak so that spraying can start early to prevent an actual outbreak. We are in the second phase of the project now, so by some time this year, this should be in full effect," he said.