Laws with teeth needed for child protection - PMI’s Jackson ... we need to recapture the spirit of community 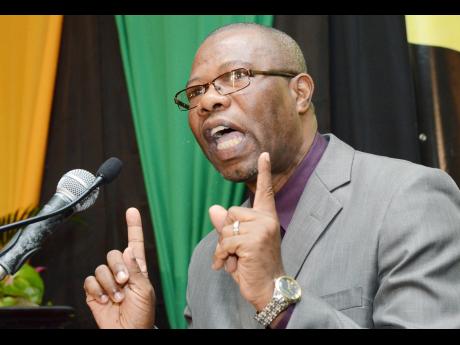 Rudolph Brown
The Reverend Everton Jackson: We need to recapture the spirit of community in our quest to keep our children safe.

The Reverend Everton Jackson, chairman of the western Jamaica arm of the Peace Management Initiative (PMI), says keeping the nation's children safe is not only a divine imperative, but a national responsibility, which should be enforced through legislation and protective policies.

"We have a responsibility through legislature and policies to see to it that the young and vulnerable are safe, and should their safety be undermined, there is appropriate sanction," said Jackson, while addressing a United Nations Children's Fund (UNICEF) event at the Montego Bay Cultural Centre on Tuesday night.

Jackson, who was speaking on the theme 'Preventing and Interrupting Violence in Volatile Communities', said that while laws are being passed nationally and internationally to protect children and ensure their safety, children are being abused without recourse.

" ... The concern I have is, too often, we pass laws without teeth. It is full time for the [Child Care and Protection Act] to bite more," said Jackson.

"The act is in place, but still, our children are being abused without recourse. Child labour is still prevalent, especially on Fridays, in some rural communities. Underage children are still having babies and no one is held accountable. Tell me, how so? This is a see and blind, hear and deaf society."

In looking at some of the other ills plaguing the nation's children, Jackson pointed to the number of children who go missing annually, the numerous instances of children being raped and murdered, those dragged into child prostitution, and those who have become victims of human trafficking.

"We cannot, as a responsible nation, turn a blind eye to these atrocities meted out to those who are considered the future of our nation," said Jackson.

"The onus is on us to explore these challenges and offer solutions as together, we seek to prevent and interrupt violence, not only in volatile communities, but in all communities in Jamaica."

abuse has NO BOUNDARIES

While the theme spoke to 'volatile communities', Jackson was careful to point out that the abuse of children crossed the society's socio-economic lines as children in "upscale and enriched communities" also have their challenges.

"They have to contend with the devastating impact of separation and divorce; the stress of unreasonable expectations re academic performance; the pressure that comes from social class competition among neighbours and friends; and the deception of false values," said Jackson.

"The fact of the matter is that whether children come from deprived environments or enriched environments, they are exposed and, therefore, stand in need of protection from vicious abusers, unscrupulous predators, irresponsible and uncaring parents and guardians, unprofessional caregivers, and all persons of a warped mind under whose tutelage the young fall."

Jackson went on to bemoan the fact that the 'it takes a village to raise a child' African principle has been replaced by European-style individualism.

"We need to recapture the spirit of community in our quest to keep our children safe. There is much we can learn from the African culture and philosophy that is strong on the view that it takes a village to raise a child. For the African, it is the community that gives meaning, purpose, and identity to an individual," said Jackson.

"In order for the community to play a more active role in the protection of our children, of necessity, there have got to be shared communal values. Together, we must agree on the core values needed for the formation and development of our children. There cannot be any compromise when it comes on to honesty, respect, decency, hard work, good manners, proper etiquette, discipline, and conflict resolution. A conflicting value system is posing a serious threat to the safety and security of our children."

In addition to UNICEF, the initiative has the support and endorsement of the Children's Advocate, Do Good Jamaica, The Gleaner Online, and Television Jamaica.