Police explain why men held after $1b drug bust released 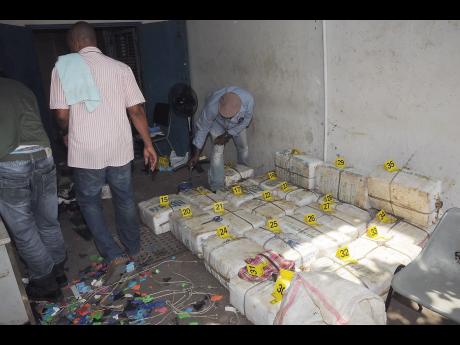 Jermaine Barnaby
Members of the Police Narcoics Division processing the 36 bales of seized cocaine at their headquarters in the Corporate Area.

The police information arm, the Corporate Communications Unit (CCU), is seeking to explain why four men it initially claimed were "observed" abandoning a drug-carrying vessel have been released from police custody.

On Saturday, the CCU said the men were detained during a joint police/military operation in Belmont District, Westmoreland after law enforcers intercepted the vessel carrying 36 bales of cocaine valued just under $1 billion (US$7.5).

"Four men, who were observed abandoning the vessel and running off in different directions were pursued and taken into custody," a CCU spokesman had said in the release on Saturday.

However, in a release this afternoon, the CCU indicated that its initial report was not accurate.

Quoting from the actual incident report, the CCU instead said the following:

"Approximately 1:00 a.m. a joint police and military team, which included the Jamaica Defence Force Air Wing and Coast Guard teams intercepted a blue 28-foot vessel, which was spotted coming ashore at Belmont. 'On the approach of security personnel to the vessel, men aboard the vessel abandoned it and ran in different directions. Four men were subsequently held'."

The CCU also said today that the four men were "duly processed" and interviewed in the presence of their lawyer and later released as investigators were reasonably satisfied that the evidence available did not link the men to the seizure.

The CCU says it regrets the error and any inconvenience that may have been caused.