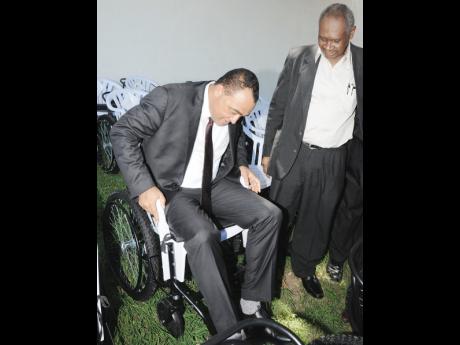 Jermaine Barnaby
Evangelist Errol Rattray (right), president and CEO of the Errol Rattray Evangelistic Association, watches as Health Minister Dr Christopher Tufton checks the sturdiness of one of the wheelchairs handed over by Rattray's association in partnership with the Free Wheelchair Mission and Ja' Mobility Wheelchair Distribution during a ceremony on the grounds of the Bethel United Church of Jesus Christ in Kingston yesterday.

Health Minister Dr Christopher Tufton is promising that his ministry will be working towards strengthening the secretariat responsible for charitable activities within his ministry.

Tufton said his ministry would also be forging stronger partnerships with agencies such as Jamaica Customs to promote a freer flow of contributions aimed at developing the health sector.

The minister was speaking during the launch of the distribution of 550 wheelchairs to the elderly and disabled, held at the Bethel United (Apostolic) Church of Jesus Christ, which was organised by the Errol Rattray Evangelistic Association (EREA) in partnership with the Free Wheelchair Mission and Ja' Mobility.

"One of the things that I have recognised is that too often, persons want to do good but hit roadblocks along the way, whether at Customs, or interfacing with the hospitals, or any other such institution," Tufton said.

"Frankly speaking, we shouldn't make it difficult for people who want to do good," the minister said.

Tufton also announced plans to forge better partnerships with private and public entities to ensure a continued source of financial support directed at the sector.

"In terms of this Government going forward, we are looking at public-private partnerships, for example, as one form of financing and support," he said,

"We are looking at the role of charities. We are also looking at the establishment of some sort of insurance scheme to complement and support the expenditure on health care."

The minister added: "When I get a chance to speak to the need for greater levels of involvement, I try to take up the opportunity because I think it's a message that is important from the perspective of recognising the significance and the contribution. I looked at the figures for last year, and in terms of contribution, the estimates suggest anywhere between $3.5 to $4-billion worth of value that flows from persons who have a good heart," the minister said.