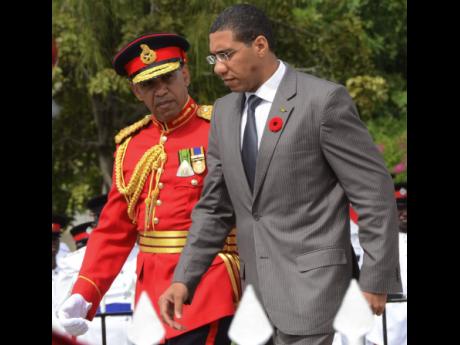 Prime Minister Andrew Holness says he will be inviting the Jamaica Defence Force (JDF) to make available talented members to serve on boards so as to ensure the efficient implementation of economic projects.

Noting that a "reservoir of talents" exists within the JDF, Holness pointed out that the skills are not only in the area of security, but there is human capital for economic and social development of the country.

The prime minister was delivering the keynote address at the 49th Victoria Cross Dinner at Up Park Cark Camp, St Andrew, on Saturday.

He said that increasing national security must include a strategy to utilise "our army in the advance of our economic and social security".

Holness explained that while he would not be seeking a change in the role of the army, the soldiers have established credibility in completing projects on time, with limited resources, and those are the skills that must be garnered for sustained economic growth.

"We have to connect those who can create the solutions. It is clear to me that you have great minds here, and those minds need to be connected with great minds elsewhere, thinking about the same problems, and finding the solutions," he told the gathering.

Holness told the soldiers that the efficient and timely way of doing things in Jamaica, as they have demonstrated over many years, will lead to job creation and improvement in the general well-being of the society.

The prime minister said the JDF members "give great pride to the people of Jamaica", and they must ensure that the institution remains a bastion of hope and civility.

The Victoria Cross celebrations are generally held at the end of May each year to pay tribute to two soldiers who were the first non-Europeans to be awarded Britain's highest award for bravery in battle.

To qualify for the award, a soldier must render service in the face of enemy action above and beyond the call of duty.