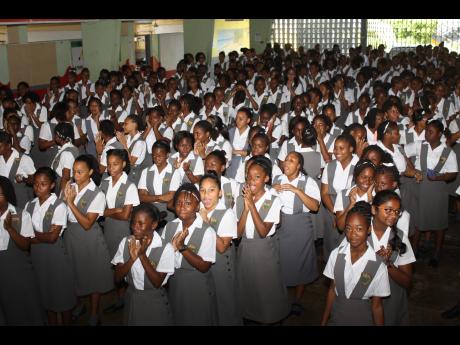 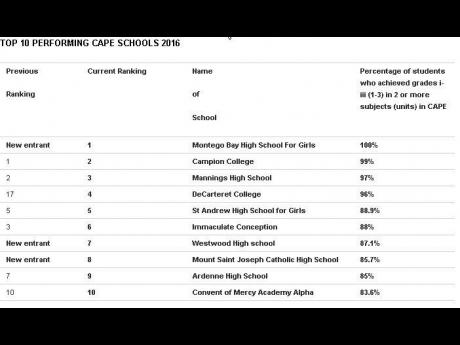 The school is a new entrant in the rankings, having only restarted its sixth-form programme in 2014. It earned the number one spot, as 100 per cent of its sixth-form cohort that sat the CAPE exams earned grades one to three in all subjects.

In fact, Educate Jamaica's overall rankings, which utilises the percentage of pupils obtaining two or more units with grades one to three in the 2015 CAPE, showed that schools that had recently started sixth-form programmes were performing credibly in the exams.

Ainsworth Darby, chief executive officer of the company, argued that the CAPE results from the Union Square school are not surprising, given its excellent performance in the Caribbean Secondary Education Certificate (CSEC).

The all-girls institution made the greatest improvement on the Educate Jamaica CSEC rankings of last year, jumping 10 places from its 13th position in 2014 to earn the number three spot.

Last year, 98.6 per cent of students from MBHS gained passes in five CSEC subjects, including mathematics or English language.

According to Darby, CSEC performance is normally a good indication of how well schools will rank for CAPE, particularly if the sixth-form programme is a new one, as is the case with MBHS.

"A school like Montego Bay, clearly they have a good cohort in grade 11, so they have a pool from which to pick, so it's not as if they are starting from scratch where they have to encourage students from other schools to come and make up their sixth form ... so they already have a good platform on which to build," he explained.

Darby also noted that topping the CAPE rankings would not have been a challenge for MBHS, given that the school has a reputation to protect and a high-performing staff complement.

Other new entrants highlighted by the rankings include: Cedar Grove Academy, which was ranked 34th; Bishop Gibson High for Girls, 36th; Guy's Hill High, 39th; Green Island High, 45th; and York Castle, 51st, with 33 per cent of its sixth-form students earning grades one to three in two or more subjects.