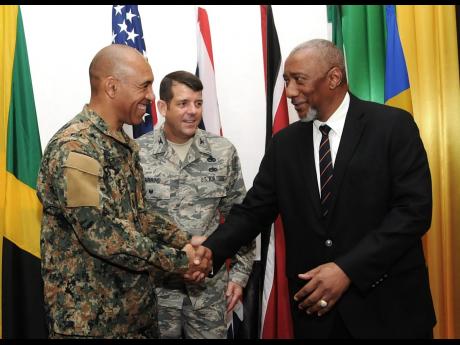 Jermaine Barnaby
Major General Antony Bertram Anderson (left), chief of defence staff of the Jamaica Defence Force, shakes hands with Francis Forbes, executive director, Implementation Agency For Crime and Security, at the launch of Tradewinds 2016 at Up Park Camp yesterday. Looking on is Col Randall Warring of the US Air Force.

Declaring that transnational organised crime such as arms and drug trafficking remains a "cancer" plaguing the Caribbean, a senior United States military official has said Jamaica remains a critical partner in coordinating the regional response to the crime.

"We must combat and defeat transnational organised crime, which is a cancer that plagues our region," deputy chief of staff for the United States (US) Marine Corps Forces South, Colonel David Carbonero, told army officials yesterday at Up Park Camp, the headquarters of the Jamaica Defence Force.

He was speaking at the launch of Phase Two of Exercise Tradewinds, military training involving 18 countries and approximately 1,300 participants. Phase Two of the event being sponsored by the US Southern Command military post will focus on transnational organised crime.

Carbonero told The Gleaner that Jamaica, which is hosting the event for the second time since 2006, is a "strategic" partner in the fight against regional transnational crime and it was important that the relationship is developed.

"Jamaica was selected because it is a key partner nation in the region and it has a very professional defence force," he said.

According to him, "Jamaica is pretty much situated in the centre, so it is a very important point from which to combat the illicit trafficking of drugs, arms (and) humans. Jamaica is (also) a strong partner with regards to the commitment that the Jamaican government gives to regional security stability."

The US military official acknowledged that the public may not necessarily be seeing actual result of the regional anti-transnational organised crime response, but he says there has been positive impact.

"Although some of the results are not obvious, we are making results in diminishing the trafficking. All our partner nations are providing strenuous efforts to combat the illicit trafficking. I do believe we are making progress in overcoming," he said.

Meanwhile, JDF Chief of Defence Staff, Major General Antony Anderson, noted that it is important that Jamaica continue to play a leading role in regional response to transnational crimes.

"All of these transnational threats and transnational networks that pass through Jamaica have an effect here. It plays itself out as crime on the streets, guns coming in, and cocaine passing through, and to the extent that human trafficking exists," he told The Gleaner.

"The criminal elements look for the cracks and exploit those gaps. The idea of an exercise like this ensures that those joints are seamless."

The United Nations Office on Drugs and Crime, in a 2012 threat assessment document on Central America and the Caribbean, said "although several contraband flows affect the region, the paramount crime issue is cocaine trafficking". It also said the security problem "is rooted in weak governance and powerful sub-state actors".

Earlier this month, The Gleaner reported the findings of US Bureau of Alcohol, Tobacco, Firearms and Explosives report which traced the history of 991 guns seized in Jamaica over the last two years and found that 567, or nearly 60 per cent, were "sourced in the US".

The World Economic Forum has estimated that illicit trade and criminal activity is worth about eight to 15 per cent of the global gross domestic product.