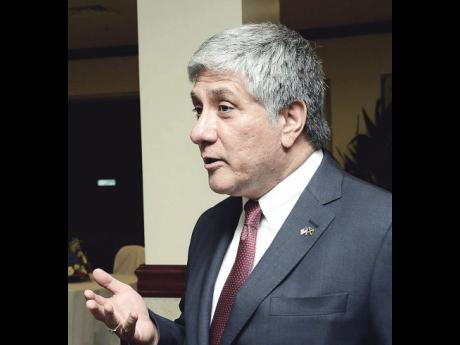 File
Moreno: If we do not do more, the cultural and economic distortion that this dirty money brings could destroy a whole generation.

United States (US) ambassador to Jamaica, Luis G. Moreno, is warning that efforts will be intensified to have more lottery scammers extradited to America to be tried there.

Since 2014, at least 15 Jamaicans have been extradited to the US, and at least five have been convicted.

"We have invested tens of millions of dollars in Jamaica's security forces, and I promise you that the steady drumbeats of extradition will only get louder," Moreno said during a reception at Devon House in St Andrew recognising America's Independence Day.

At the same time, Moreno said the US and Jamaica are stepping up joint law-enforcement operations against scammers and drug traffickers.

"Transnational crime is on the upsurge in Jamaica, specifically narcotics trafficking and the lottery scam. Both bring criminality, corruption and instability," Moreno said, noting that up to one-third of all murders are directly or indirectly related to scamming.

"If we do not do more, the cultural and economic distortion that this dirty money brings could destroy a whole generation," said Moreno.

At the same time, he said while efforts have so far have been successful, there are still judicial reviews needed to tackle the lottery scam "cancer".