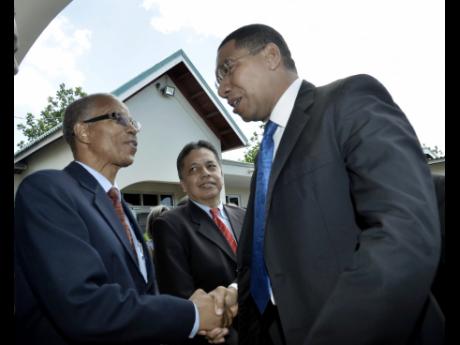 While acknowledging that the majority of funds diverted from the National Housing Trust (NHT) over its 40-year history have been put to good use, Prime Minister Andrew Holness is arguing that such decisions limit the ability of the organisation to fulfil its mandate.

It is for this reason that he has ordered a strategic review of the Trust.

The review is aimed at, among other things, determining the best use of NHT funds.

"It is now time, after 40 years, that a strategic review be done of the NHT ... . I have given directions to the chairman of the board, Ambassador Nigel Clarke, for him to start, in short order, a strategic review," Holness said while speaking at the Trust's 40th anniversary service.

Holness was adamant that the use of NHT funds for purposes other than those intended when the agency was created undermines the long-term sustainability of the body.

A controversial 2013 purchase of the Orange Grove-based Outameni property in Trelawny by the NHT sparked discussions about whether the Trust had been focusing on the core business of providing affordable housing for low- to moderate-income Jamaicans.

The building of the Emancipation Park and the drawdown of funds from the agency to repay the country's debt and finance transformation initiatives in the education system have also been singled out as instances where the Trust has strayed from its raison d'Ítre.

In 2013, the Portia Simpson Miller-led Government amended the NHT Act to allow for $11 billion to be withdrawn from the Trust on an annual basis so that Jamaica could meet its obligations under the extended fund facility with the International Monetary Fund.

Now that he has control of the Trust, Holness has indicated that a change of policy is to be effected with regard to the use of surplus funds at the organisation.

He further added that the strategic review would give consideration to proposals made by the Caribbean Policy Research Institute.

Earlier this year, the think tank published a report which proposed that employee contributions to the NHT be eliminated and that the organisation facilitate rentals for persons in the lower socio-economic brackets.

The proposals, which received mixed reactions from industry players, were predicated on the report's conclusion that the NHT had not been fully meeting its mandate.

In ordering a strategic review of the organisation, Holness expressed agreement with the conclusion.

"The fact that we are able to divert ... some of the NHT funds for other uses simply means that the NHT has not been utilising all its funds for what it is supposed to do," he said.