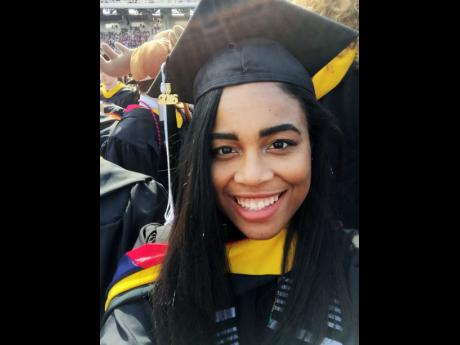 She describes the transition to UPENN as one she had to endure.

"I moved to a new country at 17, living away from my family, and dived into a male-dominated environment and into a prestigious school where some students did not require any financial aid," she noted.

"While doing my major, I had a student job, so I had to sacrifice my remaining time to study, which others could have done for free."

However, from her days at the Wolmer's Girls' School, Walcott was always determined to succeed.

She noted that she always remembered her alma mater's motto: 'Age Quod Agis' (Whatever you do, do it well).

At Wolmer's, Walcott was encouraged by her teachers and peers to pursue a career in the field of the sciences.

"All of my science teachers there were women - for chemistry, physics, and mathematics - so I had good role models and support all around."

Travelled from May Pen

Additionally, she had to traverse to Wolmer's from May Pen every morning.

"Many persons, when they found out, could not believe I travelled daily from May Pen, Clarendon, where I lived. I woke up at 5:30 a.m. in order to get to school ... and I'm pretty sure my attendance was close to perfect. My mom always made sure of it."

She added with a laugh: "My mom also worked in Kingston, so my sister and I drove with her. The journey was worth it and got much better with the highway."

At the University of Pennsylvania, Walcott also developed an interest in engineering entrepreneurship and took it up as a minor. She also became heavily involved in multiple extra-curricular activities.

"I just worked hard and tried to make the most of the resources around me. I joined the Modular Robotics Lab as a student researcher. I was also on the board of Advancing Women in Engineering, and I gave back during spring breaks on volunteer trips, and things like that."

As part of their UPENN senior year, students were required to participate in a student design competition, and her team, Oceanus, was awarded first place for its project on autonomous wave-powered desalination.

Walcott has been accepted to the Mechanical Engineering and Applied Mechanics Master of Science in Engineering programme, but there will be no need-based aid.

As a result, she is interning at a start-up in Toronto, working on product development, data analytics, and inventory management.

"I deferred my admission to the master's [degree] so I can both get experience in my major and minor and try to save what I can to help facilitate another dream of mine."

Chevonae says one has to "stay positive" and be "faithful" to achieve one's dreams.

"I would say that surrounding yourself with those who support your ambitions and goals is important. Jamaicans can truly do anything when they have a vision for themselves. Then while working towards the dream, it is key to stay positive and faithful. Some days, I myself didn't know how I would ever understand a topic, and when I enrolled, I didn't know how the finances would stretch."