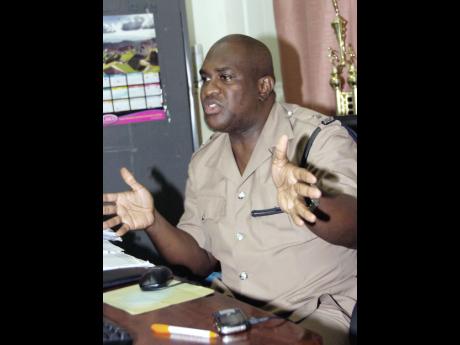 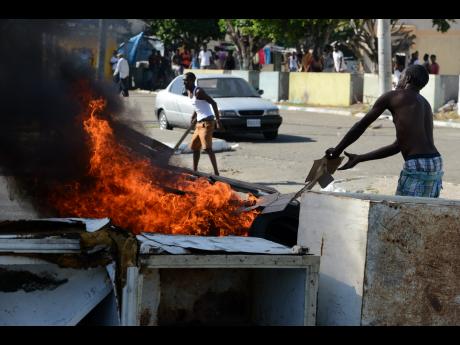 Ricardo Makyn
Tivoli residents staging a fiery protest against the killing of 19-year-old Tevin Gordon in the community, were not quieted until they were addressed by SSP Steve McGregor who they want to return as the head of the police division which covers the area.
1
2

Several residents in the violence-plagued West Kingston Police Division were left angry recently when Senior Superintendent Steve McGregor quashed rumours that he had been sent back to lead the policing efforts in the area.

McGregor's announcement was met with expletives by some residents, who were already angry over the fatal shooting of 19-year-old Tevin Gordon in the community.

"I work out of the Territorial Operations Branch. We have superintendents in all of the divisions and wherever there are issues we offer support. That is how I have been assisting with the West Kingston situation," said McGregor, after reaping some success in the division following the 2010 extradition of former Christopher 'Dudus' Coke.

McGregor was transferred from West Kingston to St James before his current posting.

"It (West Kingston) took a couple of steps back after I left. I have been on record to say that if I knew that it was only a year that I would have spent in St James, I would not have left West Kingston. We were on course to make West Kingston into a model division," McGregor told The Sunday Gleaner.

"A year cannot change what is happening in St James, but that is water under the bridge. I don't think it (West Kingston) is far gone. Mr Chambers is trying," added McGregor in reference to Superintendent Howard Chambers, who now heads the division.

Chambers later told our news team that he is satisfied with the level of support being given to him by West Kingston residents, and that the trust between himself and the residents is taking its time to grow.

"We all agree that the relationship that we have been building together must continue, as the pros far outweigh the cons," said Chambers.

The decision by the Police High Command to move McGregor from West Kingston to St James and later to Territorial Operations Branch has rekindled the long-running debate over the transfer policy of the force.

"You can't say community policing and then have an officer who becomes immersed in the community, based on their actions, and then remove them," argued Robert Finzi-Smith, security head at the University of Technology, Jamaica.

"You are either doing community policing or you are using it as a catchphrase while you attempt the paramilitary route. Either one can work, but they can't work side by side. You show me a policeman who doesn't know a criminal and he hasn't been doing his job," added Finzi-Smith, as he argued that changes in Jamaica's troubled communities demand patience from the Jamaica Constabulary Force (JCF).

"Everybody goes after Reneto like he was a mass murderer, but Reneto never fired his gun, you know. Reneto surrounded himself with people like me who did the firing. What made him good was the level of trust that the citizenry had in him," added Finzi-Smith.

Neither Deputy Police Com-missioner Novelette Grant, who heads the JCF's administration portfolio, nor Superintendent Stephanie Lindsay, head of the Corporate Communications Unit, was available to speak with The Sunday Gleaner last Thursday.

But retired Deputy Super-intendent Altermoth 'Parra' Campbell said transfers are usually good for policemen's personal development, even though they are sometimes done at the expense of the communities.

"A police might feel fatigued or need a change, and a transfer is good for that, but when you are doing well and there is chemistry between you and the people, I don't think it is right or smart to transfer that officer.

"It takes time to gel with the people. Like McGregor's transfer from Tivoli Gardens to St James; I don't think that was a good move," said Campbell.