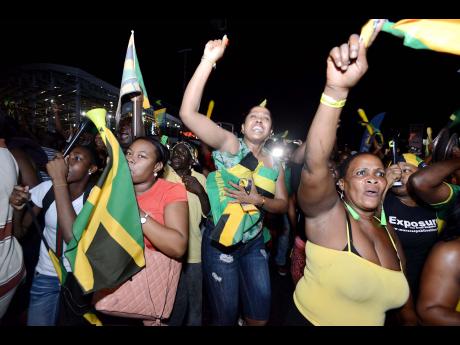 As with his previous performances in the Beijing and London Olympics, the collective expectations of the entire country were pinned on Usain Bolt as he sought to cement his legacy in the 100m finals in Rio de Janeiro, Brazil.

Those expectations were palpable in Half-Way Tree, St Andrew, where Jamaicans gathered last night, as has become tradition, to witness an Olympic record that is not likely to be equalled anytime soon - if ever at all.

The fact that Bolt's female counterpart, Shelly-Ann Fraser-Pryce, missed out on her bid to become the first woman to win three consecutive individual Olympic gold medals in track and field was still fresh in the minds of many who wondered if the same fate would befall Bolt.

"Mi nervous fi him, God know. I hope him win, but after seeing what happened to Shelly, it hard to tell," one woman said.

Others were, however, bold in expressing their confidence in the ability of the sprint superstar to deliver in his bid to become the first man to win three Olympic 100m titles and three Olympic triple sprint gold medals.

"Him a go win, man. Bolt a go lef them inna the dust. Him affi win," another spectator said while speaking with The Gleaner.

Half-Way Tree was jubilant during the race, and once the 9.81 seconds - that it took Bolt to cross the finish line - had elapsed, the celebrations began in earnest.

A Jamaican living overseas told The Gleaner that she had returned to the island just to watch the race.

"I just had to be in Jamaica and in Half-Way Tree to witness this moment of history in Jamaican. I am so proud to be a Jamaican and I am proud of Usain," she said.

The bumper crowd that had gathered moved in unison as unadulterated excitement was unleashed on the streets of Half-Way Tree. The cheers rang out from the transport centre and created a wave of pure joy, which could be felt long after leaving the area around the big screen, where everyone had gathered to witness history in the making.