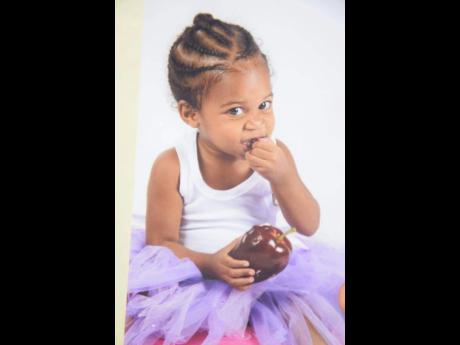 Okoye Henry
Tiana Ken before she fell victim to cancer of the kidneys.

Lacie-Ann Gray, of Montego Bay, St James, is a mother facing a major crisis. The doctors have reportedly given up on her three-year-old daughter Tianna Ken, who has been diagnosed with stage four cancer of the kidneys, but she plans to battle on in a defiant bid to save her child's life.

In a recent interview with The Gleaner, Gray said her daughter, who was admitted to the Bustamante Hospital for Children in Kingston, was discharged after the doctors concluded that her situation had become hopeless based on the advanced stage of her cancer.

"They (doctors) said they don't have any more options on what to do with her. They said she is fine so far, but she still has this breathing problem, so I don't know why they are sending her home," said Gray.

Before her three-week stint at the Bustamante Hospital for Children, Tianna was hospitalised at the Cornwall Regional Hospital in Montego Bay, where the doctors also concluded that they could not do anymore to address her cancer challenge. It was that conclusion that caused Gray to take her child to the Kingston-based hospital.

"A doctor at Cornwall Regional told me they send Tianna to go home and die," said Gray, emphasising the harsh realities she has been confronted with from health professionals.

Driven by faith in the improbable, Gray is now looking outside of Jamaica for help and is currently trying to get a letter to help facilitate her daughter's admittance to an overseas hospital. However, according to Gray, the letter has not been forthcoming as neither the Bustamante Hospital for Children nor Cornwall Regional Hospital has been willing to provide her with a letter.

Shena Carty, of the United States-based Jamaican Madhouse team, whose organisation recently played a pivotal role in assisting Jermaine Barrett, of Flanker, in St James, to have surgery done in America to remove a tumour from the back of her eyes, has expressed a willingness to assist young Tianna.

"We are in the process of finding doctors in the States to take her. This has been a long process since Cornwall Regional took over eight months to produce the medical records that were requested. We finally got them, and now the challenge is to get her where she will get the proper care she needs," Carty explained.

Jamaican Madhouse has set up a GoFundMe account on Shena Carty's Facebook page to secure financial support for Tianna. There is also an NCB account, number 874 143 871, for the same purpose.

According to Carty, so far, the campaign has raised more than US$5,000. The team, in partnership with the Fairfield Theatre in Montego Bay, will be hosting a fundraising event at the facility this Saturday, August 27.

"We are trying to be as quick as possible with the process as time is of the essence," said Carty.

When the Cornwall Regional Hospital was contacted for a comment, a spokesperson promised to respond in writing. They are yet to respond.