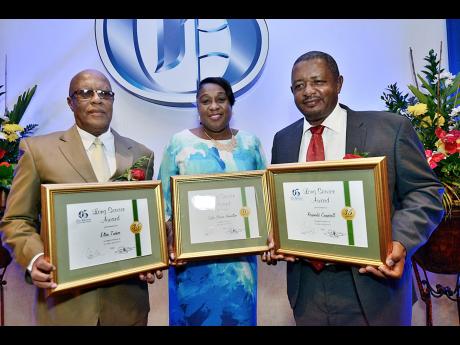 Ian Allen
The standout employees for up to 35 years of service to the company pose with their plaques. They are from left Elton Tucker for 35 years; Sylyn Brown Hamilton for 30 years and Reginald Campbell for 35 years. 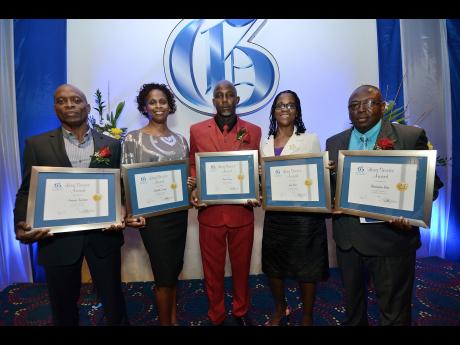 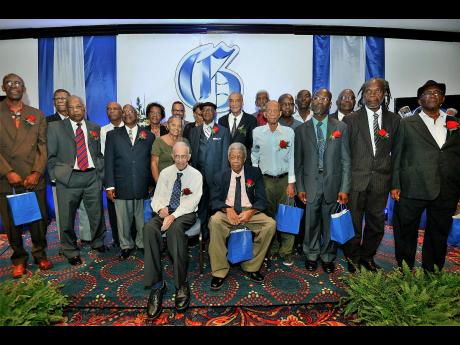 The Gleaner's pensioners were also recognised at the ceremony. Here, they pose for the camera. Seated in front are former Deputy Managing Director Christopher Roberts (left) and Ken Allen, a former editor-in-chief.
1
2
3

Thirty-nine long-serving employees of The Gleaner were on Tuesday recognised for their dedicated service during the company's annual long-service awards and pensioners' luncheon held on Tuesday at The Jamaica Pegasus hotel in New Kingston.

The awards were being held on the same day the company marked exactly 182 years since the first publication of The Gleaner, and the beautiful decor of the suite reflected the significance of the occasion.

Among the special guests who attended the event were the Chairman of the RJR Communications Group, Lester Spaulding, and his Chief Executive Officer, Gary Allen.

Managing Director of The Gleaner Company Media Limited (GCML) Christopher Barnes and several directors of the board were also present.

Barnes assured workers and pensioners that the company was in good shape.

He also said, "The company is going through an exciting experience," making reference to the recent merger of GCML with the RJR Communications Group.

The audience was left enthralled by the Sound of Joy band in partnership with entertainer Mario Evon who, through his usual energetic style, belted out crowd favourites such as R. Kelly's World's Greatest and his own rendition of Everything I Own, first done by American soft rock band Bread.

The awardees were treated to a mouth-watering fare from The Pegasus, including Jamaican pepper pot soup and a scrumptious meal of chicken Milanese, grilled marinated fillet of snapper with garlic butter, glazed broccoli with string beans, and Spanish rice. A fine wine was served to please the palates of the guests.

Ten employees from the Editorial Department were recognised; nine from the Business Development and Marketing Department. Six staffers from human resource and administration rounded out the departments recognising the most employees.

Among the awardees were Reginald Campbell, from the Circulation Department, and Elton Tucker, from the Editorial Department, who have both served an impressive 35 years at The Gleaner.

They were both hailed for their hard work and dedication to the company.

Forty-seven retirees were also among those taking part in the afternoon's activities. Included among them was Christopher Roberts, a former deputy managing director of The Gleaner, and former editor-in-chief Ken Allen.

The guest speaker was chairman and CEO of Cari-Med Limited Glenford Christian.

Christian said The Gleaner was a distinguished organisation and lauded the company for fostering a family spirit that has "caused it to do well over the years".