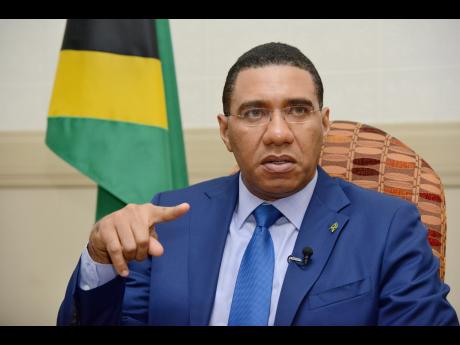 The Jamaica Labour Party administration seems set on fulfilling its promise of making it a legal requirement for the publication of assets and liabilities of prime ministers and leaders of the opposition, based on an anti-corruption

legislation that is now before the Parliament.

Justice Minister Delroy Chuck last Tuesday tabled the Integrity Commission Bill in the House of Representatives during its first meeting after a summer of calls from interests groups for the Government to demonstrate its commitment to strengthening Jamaica's anti-corruption systems.

A similar bill that had been before the House since 2014 fell off the Order Table after Parliament was prorogued in February to make way for the general election.

Unlike the previously bill, the Government has introduced a provision for the publication of a "summary of the statutory declaration made by the prime minister and the leader of the opposition".

That summary will include, among other things, all forms of income, automobiles, savings accounts, real-estate mortgages, business investments, and the cash value of any life insurance.

The proposed bill includes a provision for the prime minister or opposition leader to "make a written complaint to the director of administration" in relation to the publication.

That director would be a position created in the Integrity Commission that would represent a single anti-corruption body with prosecutorial powers, incorporating the Office of the Contractor General, the Corruption Prevention Commission and the Parliament (Integrity of Members) Commission.

"The prime minister had intimated that in the Integrity Commission Bill he wanted full disclosure from all parliamentarians and also other public officials," Chuck told The Sunday Gleaner.

"However, since there was no agreement with the Opposition up to the time when we tabled the bill, we agreed that only the prime minister and the leader of the opposition would disclose their assets and liabilities.

"But within two years, a decision will be made as to who else would disclose their assets and liabilities, and also in what form," added Chuck.

He argued that including the mandatory disclosure in the legislation is important "because there is a call for all political representatives to disclose their assets and liabilities".

Mark Golding, the opposition spokesman on justice, who first tabled the bill, said he was pleased the legislation is back before Parliament, but argued that the disclosure requirement for the prime minister and leader of the opposition "is neither here nor there".

"I don't consider this a particularly important issue. I think what matters is that the Integrity Commission, when it receives the filings, is in a position to do a proper analysis of them. This particular feature of release to the public will go some distance towards appeasing the desires of the media and some civil-society actors.

"I'm hoping it (the bill) will represent a true expression of what was there before," said Golding, as he pointed to the amendments recommended by a joint committee of the last Parliament.

In the meantime, Professor Trevor Munroe, executive director of the anti-corruption lobby National Integrity Action, said the disclosure provision is "an important first step on the road to a more transparent regime for public officers".

According to Munroe: "I emphasise a first step because, obviously, it should not only be the prime minister and the leader of the opposition but other leaders as well.

"The bill has been previously subject to two joint select committees in successive administration and, therefore, in the context of public concern and controversy regarding assets and liabilities of public officers, it is urgent that this bill be passed into law."

The proposed legislation will now go before a committee of Parliament for deliberations.