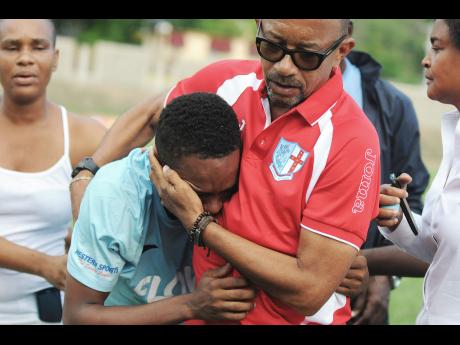 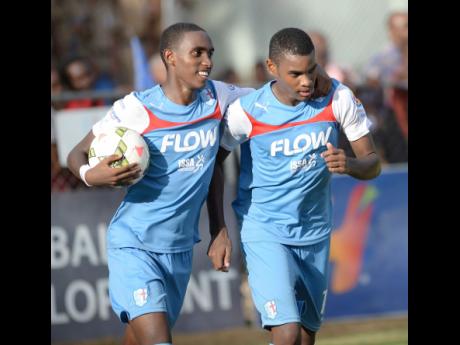 David James has been a fixture in the stands at ISSA-FLOW Manning Cup football matches to support his son Dominic. It was, therefore, not a surprise yesterday to see him among the spectators at the Stadium East complex for the match between St George's College and Excelsior High School.

But instead of seeing his only child, the captain of the St George's College team, score a goal, he watched him collapse. It was he who drove the vehicle that took Dominic to the University Hospital of the West Indies, where he was pronounced dead.

Dominic's father said the family is "coming to grips with the death".

"It is a reality. It happened so quickly. I was watching the ball when someone called out that Dominic is down. When my eyes came back to him, I saw him lying down and rushed from the stands.

"He was out there a little bit and then the travel from the Stadium East to the University Hospital. There was no stretcher and ambulance at the venue. Something should be done in the future. I am not knocking anybody," he told The Gleaner about his only son.

Approaching the half-time break, when news of his death reached the stadium, players from both teams collapsed on the field, crying openly. Dominic's coach, Neville 'Bertis' Bell, wept. Other team officials were also in tears.

The 18-year-old grade 13 student fell to the ground in the fifth minute of the game. Excelsior's captain Cadine Graham, who is a close friend of Dominic, was seen in tears and had to be consoled by Excelsior's coach Shavar Thomas.

The players were led to their respective changing rooms, and then referee Wilverglen Lamey called off the game at the interval.

Later at Winchester Park, the St George's College home ground, the team's coaching staff, chairman of the board, Fr Rohan Tulloch, schoolmates and others gathered. It was a scene of unspeakable grief.

Bell, the long-serving St George's College Manning Cup football coach, says in all his years, it is the first time that one of his players had died during a football game.

"This has never happened in all my years as a coach. He had a seizure early in the game and was rushed to hospital. Then news came that he died. This one is tough, as although he came over from Jamaica College last year, he was like a son to me," Bell told The Gleaner.

"Credit to assistant referee Keeble Williams, who saw when Dominic collapsed and called the referee. When I looked at him, his eyes were glassy," Bell, also a St George's College past student, disclosed.

Prime Minister Andrew Holness expressed his regret at the passing of the student.

"I am deeply saddened by the sudden and untimely death of young Dominic during the football match yesterday. One cannot imagine the great sorrow of his parents and the trauma to the team, coaching staff, and the school population. In this moment of grief, our thoughts and prayers go out to the family of young Dominic and to the St George's community," he said.

Minister of Sport Olivia Grange also commented on the sudden death of the student. "Like the rest of the country I am very sad to receive this news. No one expected this. Young Dominic, by all indications, had been doing well.

"He represented his school well. He was the captain. And had a very bright future. So this is quite a shock. All of Jamaica will mourn with his family and with his school at this time. We all must keep them in our prayers and in our hearts."

Dominic spent five years at JC, where he won the Manning Cup in 2014. He transferred to St George's College in 2015 and was a member of the winning FLOW Super Cup team.