'Jamaica's high commissioner to UK should be appointed urgently' 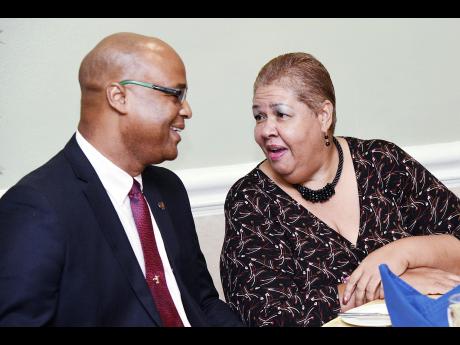 Aloun Assamba, former Jamaican envoy to the United Kingdom (UK), commented Monday that despite there being no breaches identified with the deportation of 42 Jamaicans from the UK recently, the need to appoint a Jamaican high commissioner is urgent.

Asamba, also a former St Ann South Eastern member of parliament, and minister of tourism, entertainment and culture, was speaking to The Gleaner at the 2016 staging of the Jamaica Teachers' Association Co-op Credit Union Tertiary Scholarships and Grants Awards Ceremony, held at the Courtleigh Hotel in New Kingston.

Jamaica has been without an ambassador to the UK following the end of Assamba's stint in April this year.

She had been serving in the position since May 2012.

Assamba insisted that nothing out of the ordinary occurred, despite the absence of a high commissioner, and said that an acting high commissioner had been appointed in the interim, upon her exit from office.

She highlighted that there are certain responsibilities to be carried out that only a high commissioner can carry out (for the benefit of Jamaicans residing in the UK) and, therefore, the appointment needs to happen fast.

As it relates to what some have termed the unfair removal of the Jamaicans from the UK recently, Assamba said that as far as she knew, there was nothing done incorrectly throughout the deportation process.