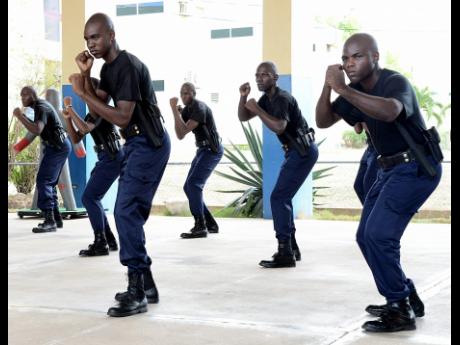 Ian Allen
Policemen in combat mode during a demonstration of the Less Lethal Force Training and Defensive Tactics at the National Police College of Jamaica in Twickenham Park, Spanish Town, St Catherine, yesterday.

Fatal shootings by the police are expected to be reduced with the handing over of 3,500 non-lethal kits to the Jamaica Constabulary Force (JCF) yesterday, a donation from the Embassy of the United States of America.

The 3,500 kits, which are the last of a batch of 7,000 donated by the US Embassy, were presented at a ceremony at the Twickenham Park Police Academy in St Catherine. Each kit consists of a utility belt, a container of mace (pepper spray), a night stick (baton), and a pair of handcuffs. The first set of kits was delivered in November of 2014.

Following the handover ceremony, the JCF demonstrated how the non-lethal kits would be used as an alternative to the shouting at and shooting of civilians the police force is usually known for.

Commissioner of police Dr Karl Williams described the donation as a game changer that would provide police officers on the front line with an alternative to firepower.

"What does this mean for policing in Jamaica? It will be a game changer because it will finally provide front-line police officers with an alternative to the use of the firearm as a first resort, and the life-threatening consequences that result from the deployment of deadly force will no longer be a matter. This paradigm shift will enable our police force to demonstrate much greater respect for human rights, and that eventually should improve confidence in the JCF," the commissioner said.

He also expressed gratitude to the United States Ambassador to Jamaica, Luis Moreno, whose tenure as ambassador will be complete by the end of the year.

"Ambassador (Moreno), you have made a habit of being generous to us in law enforcement and we want you to know that we deeply appreciate it. If you stretch your imagination just a little, just consider how the deployment of these less-lethal weapons, combined with the recently acquired body-worn cameras, will change the face of policing in Jamaica. Since we received the first kits two years ago, the United States Embassy has provided tremendous support through the training of 26 JCF officers as less-lethal trainers," he said.

National Security Minister Robert Montague said that the handover of the kits was in observance of the continued effort of moving towards effective policing.

Joshua Polacheck, counsellor for public affairs at the US Embassy, told The Gleaner that the US still struggled with the problem of some of their police officers using excessive or lethal force and that the US authorities had learned a lot from how the police operated in Jamaica and they would look to implement some of the JCF's strategies into their system.

"Obviously, we're continuing to deal with issues of police-involved shootings, and it's something both of our countries need to work on. I can tell your readers that we (have) been learning a lot from our work with the JCF."