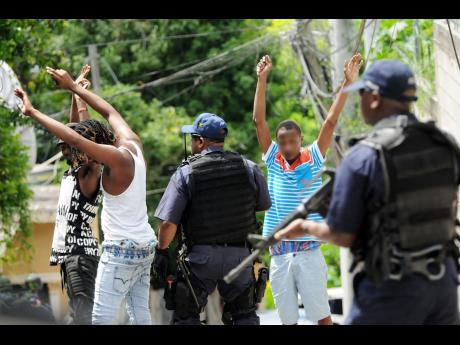 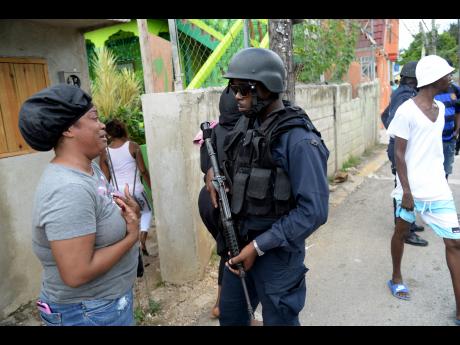 Jermaine Barnaby
A resident of Mount Salem, St James, who lost a family member during the recent upsurge in violence, speaks with a policeman yesterday. 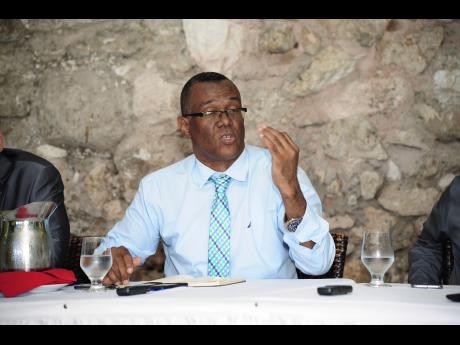 Charles Sinclair, councillor for the Flankers division, is gaining support for his calls for a limited state of emergency in sections of Montego Bay in light of the slew of gun killings and shootings that have gripped the city.

During a Gleaner Editors' Forum in Montego Bay, St James, several stakeholders, including Godfrey Dyer, chairman of the Tourism Enhancement Fund (TEF), said all options for maintaining order seem to have been exhausted and that despite objections from some tourism stakeholders, a state of emergency seems to be the only way to suppress the murders.

"I think because of the last one we had in 2010, everybody thinks [that] with a state of emergency, the same will occur, and that is not necessarily so. We have had many states of emergency without any major alarm ... ."

"September and October are slow months. And we should have done it to fall within this period to give the police the opportunity to do the searches. You would have cleaned up everything and been ready for your winter (tourist) season. And again, you can state where the state of emergency is. It does not have to be in the hotel areas. Fifteen people killed in one week is also turning off people," he added.

CEO of Global Outsourcing Solutions Davon Crump said some investors in the BPO sector had delayed their site visits to Montego Bay because of the upsurge in murders.

"If we should send a message to our partners in the US and Canada that we are doing a limited state of emergency to solve the problem, that would send a better message. The reality of it is that they read the newspapers every day. They see the headlines here, and that's the reason they won't want to come. I didn't have to tell my clients what is happening here ... . In any case, there are travel advisories on most of the US and Canadian websites," Crump said.

Chairman of the Peace Management Initiative the Reverend Everton Jackson said a limited state of emergency is worth considering at this time.

"The fact of the matter is that we all know that a state of emergency is never ever the first option to crime fighting ... . Having lost 200 lives in this parish at this time and giving consideration to the fact that there are some persons who are nursing gunshot wounds and the climate of fear that has been created, a state of emergency must be seen as a way to be considered to assist in fighting the crime situation that we are now experiencing," Jackson said.

The men's comments came after Sinclair indicated that it was the stigma associated with states of emergency why the authorities and some stakeholders were wary. He said when he first called for a state of emergency several weeks ago, the idea was to give law-enforcement organisations the authority to conduct intelligence-driven, detailed, intense searches to recover guns.

"We have heard persons say 'do curfews' and 'put more police there', but look at the Constabulary Force Act, the act that permits curfews to be imposed. Curfews can only last for 48 hours. It has a limitation in time, but the police action may require an intense search that may need to take more than 48 hours," he added.