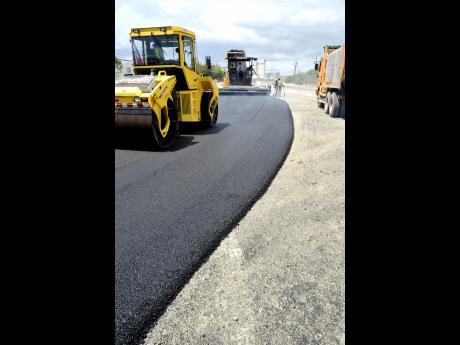 Norman Grindley
Workmen were seen paving a section of the westbound lanes of Marcus Garvey Drive in Kingston yesterday.

Ninety-seven per cent of the rehabilitation and expansion work on Marcus Garvey Drive has been completed, with the project looking set for completion by the April 30 deadline, according to National Works Agency (NWA) Communications Manager Stephen Shaw.

"Contractually, the work is slated for completion at the end of April. We had, however, been working towards an end-of-March date for practical completion," Shaw said.

Workmen were busy on the westbound lanes with the first layer of asphalt being laid as of yesterday.

Light poles were also being installed, as they quicken the pace with the final month of work approaching.

Shaw said the improved drainage features, to include the widening of the Shoemaker Gully along with the construction of several lateral drains, will serve to make the roadway less prone to flooding.

"Regarding drainage features, these have been improved with the widening of both the Tivoli and Shoemaker gullies. A number of lateral drains have also been constructed," Shaw said.

Some 40,000 vehicles traverse the roadway daily, according to a NWA survey, making it one of the busiest on the island.

Marcus Garvey Drive is also a major link to the Kingston Container Terminal and the industrial belt at Newport and downtown Kingston.

The US$20.5-million project is being undertaken under the Major Infrastructure Development Programme through a concessionary loan from the Chinese government.

What's left to be done?

- Outstanding works to include about 50m of Jersey Barrier.

- Work on the final layer of asphalt on both sides of the road has begun.

- Street lights and traffic lights to be installed.

- Some access/egress to businesses.