Never again! - After being viciously stabbed, allegedly by their co-worker, traumatised cousins vow not to return to Moncrieffe's 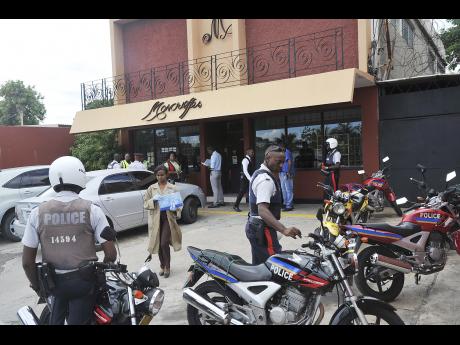 Norman Grindley
Police gather outside Moncrieffe's Patio Shop on Old Hope Road in St Andrew, on Friday, after four people were stabbed allegedly by an employee.

After reportedly being viciously attacked last Friday by an employee, co-owner of Moncrieffe's Patio Shop, Vassel Moncrieffe, and his 19-year-old acting assistant manager, Jadene Wilson, both successfully underwent surgery and are recuperating well in hospital.

The third injured party, 18-year-old Jenelle Roach, acting secretary, was released from the Accident and Emergency section of the Kingston Public Hospital (KPH) same day. Vassel Moncrieffe's wife, Barbara, who was co-owner of the business, died on the spot.

It is alleged that shortly after midday on Friday, Roach and Wilson, both cousins, and the Moncrieffes were attacked at their Old Hope Road offices by a male employee wielding a knife and hammer.

The teenage cousins received more than a dozen stab wounds during the ordeal, with Roach being stabbed twice in the forehead and once in the breast, and Jadene being stabbed in the neck, torso and back multiple times.

In recounting her experience, Wilson expressed that she would not be returning to Moncrieffe's as result of the traumatic experience.

"I heard Moncrieffe shout out, 'Wooie!', so I was running around the back to help my boss, and same time he rushed me. I held on to the hammer and he started to use the knife. My cousin screamed out, and that's when he rushed after her. I escaped by jumping over the back wall," she told The Gleaner.

Venetia Harper expressed similar sentiments on her daughter Jenelle's behalf, stating that she would be seeking counselling for the 18-year-old.

"Since the incident, I have to be sleeping beside her. It traumatised her and she said she doesn't plan to go anywhere near that place."

Harper disclosed that she spoke with the alleged attacker two days prior to the incident.

Dahlia Garrick, operations officer at Corporate Communications Unit, disclosed that formal charges would be laid against the accused by today.

"Someone was taken into custody on Friday. Statements have been collected and the investigation is proceeding at a smooth pace," she said.