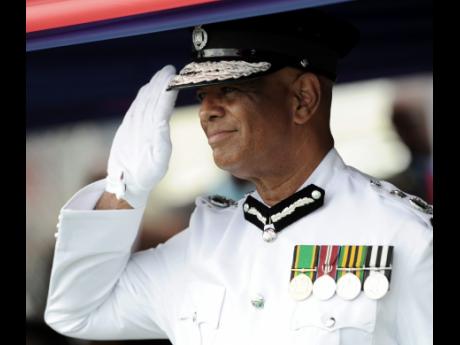 Ricardo Makyn
Commissioner of Police George Quallo salutes his men and women in the parade yesterday. 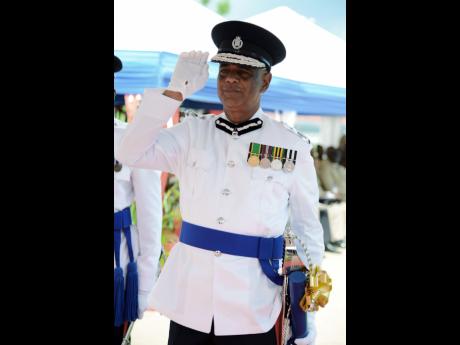 Ricardo Makyn
Newly appointed Commissioner of Police George Quallo salutes after being presented with the instruments of appoinment, at the installation ceremony at the Police Officers' Club yesterday.
1
2

In the presence of numerous local and foreign dignitaries, yesterday, newly installed Police Commissioner George Quallo declared his full support for members of the force, who, from time to time, may have to apply deadly force against members of the public.

Quallo's announcement came at the Police Officers' Club in St Andrew during his official installation as the island's 29th police commissioner.

His statement, made before dignitaries like Prime Minister Andrew Holness, Opposition Leader Dr Peter Phillips and United States Ambassador to Jamaica Luis Moreno, was met with loud applause from the audience, which comprised mostly of scores of Jamaica Constabulary Force (JCF) members.

"I make no apologies for taking this principled position. Particular situations will require the use of force, especially against hardened criminals. Colleagues, I will vigorously defend you when you have no option but to use justifiable force to protect your own lives and the lives of our citizens," he stressed.

In recent times, the United States Embassy in Kingston has donated less-than-lethal kits to the JCF to assist them in reducing deadly force against the public.

Quallo was experiencing a slight throat problem during what was his first official address, but sought to outline, convincingly nonetheless, that he will not be supporting members of the force working to further erode trust between the people and the police.

... 'But I will not support wanton abuse of the public'

"I will not stand for or defend any of my colleagues who wantonly abuse the rights of the citizens you swear to protect and reassure."

He stated that much of his commitment would go towards removing the stain of corruption from the force and also stressed that he would work hard at ensuring that his force is well taken care of.

"I will lead the continued fight to remove the stain of corruption from our uniforms, no matter the designated rank. The majority of the men and women of the JCF are people of integrity. I say, with a deep and profound sense of purpose, that my tenure as commissioner of police will be characterised by the valiant fight against corruption.

"I do not need convincing that our greatest resources are the men and women of the constabulary. As such, I will be placing much attention, ensuring that the welfare of the people I lead is looked after to make it easier for them to serve and protect all of us. Once certain administrative obstacles are removed, then a more dynamic and motivated force will emerge," the commissioner said.

Quallo said that he is under no illusion that the task of dealing with crime is easy. He demanded the support of all.