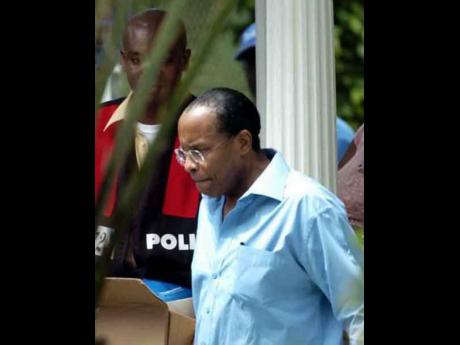 Ricardo Makyn
Carlos Hill is arrested. He is escorted from his home at Norbrook, St Andrew by the police, facing fraud charges. 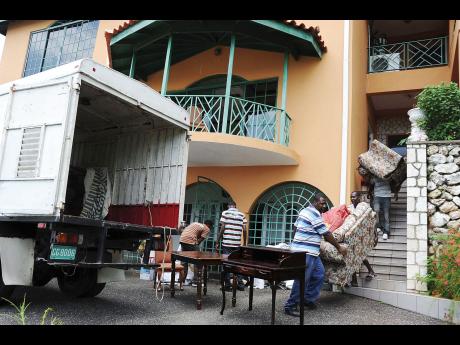 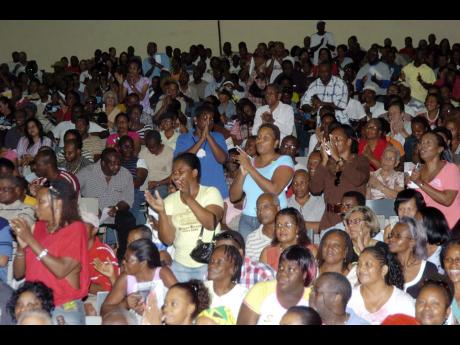 Norman Grindley
A section of the large and eager crowd that attended a meeting addressed by Cash Plus CEO Carlos Hill in 2007 at the Merl Grove High School Auditorium in St Andrew.
1
2
3

Former Cash Plus boss Carlos Hill was yesterday freed of fraud charges in the long-running case against him in which thousands of depositors lost money in the unregulated scheme he operated. It is the culmination of more than nine years of court attendance, extensive delays and undelivered promises to heartbroken investors. Here's the timeline of some of the important developments in the case:

2 December 15, 2007: Information published on the Financial Services Commission website and notices published in the press states that the Carlos Hill-led organisation has until December 20 to disclose details about its assets.

3 December 17, 2007: Cash Plus Ltd is granted injunction barring the National Commercial Bank (NCB) from closing some 26 accounts it has with the bank. NCB appeals the decision. The court later lifts the injunction, giving NCB the go-ahead to close the accounts.

4 December 30, 2007: Cash Plus Group says it will transform itself from mainly a financial operation to a multifaceted conglomerate.

5 February 1, 2008: Attorney-at-law Harold Brady, one of the lawyers representing Cash Plus Ltd, says that the investment scheme will be taking steps immediately to go to the Court of Appeal for a stay of the judge's order to close its remaining accounts with NCB.

7 April 9, 2008: Court-appointed co-interim receiver-manager Kevin Bandoian states: "The dates for repayment to lenders, which were published by Carlos Hill on March 30, are no longer valid, as Hill has confirmed his inability to source the money to begin the repayments."

9 October 9, 2009: Hill, is charged with 15 counts of fraudulently inducing people to invest after he appears before the Corporate Area Resident Magistrate Court.

10 October 6, 2009: Hugh Wildman, the liquidator of the unregulated investment firm Cash Plus Limited, tells a press conference that his team has discovered US$25 million (J$2.2 billion) that Carlos Hill and his brother Bertram are suspected to have tucked away in a Swiss bank in Dubai in the United Arab Emirates.

11 April 7, 2010: The case against Hill, his brother Bertram and chief financial officer Peter Wilson is set for August 13 in the Corporate Area Resident Magistrate's Court.

12 October 1, 2012: Although the prosecution is ready to proceed, the matter has to be put off to March 4, 2013 because his lawyers are engaged in other cases.

13 March 4, 2013: Attorney-at-law Hugh Wildman, the former Cash Plus liquidator and former trustee in bankruptcy, says he is now representing Hill in the liquidation process. He makes an application for Hill's trial to be put off because his instructions are that there are some developments which should result in the depositors being in an advantageous position. Hill has his bail extended and is to return to court on March 11.

14 March 7, 2013: The Gleaner-Power 106 News Centre reports that Hill has indicated to the authorities that he wants to make amends. In documents sent to the Office of the Director of Public Prosecutions, Hill indicates that he has found US$75 million (J$7.3 billion) which he intends to forward to the Office of the Trustee in Bankruptcy for disbursement to investors.

15 March 11, 2013: The Cash Plus trial begins. A seven-member jury is selected to try the case, but an adjournment is granted until March 12, 2013 to give the defence lawyers time to review a document the prosecution serves on them.

16 July 24, 2013: Attorney-at-law Valerie Neita Robertson states that Carlos Hill, who is facing fraud charges, will be taking his case to the Constitutional Court to have the charges against him dropped.

17 November 21, 2016: A prosecutor reveals that a number of witnesses in the case cannot be located. Hill's trial is again postponed, eight years after he was charged in connection with the collapse of the investment scheme.

* The case against Hill's brother and his chief financial officer was dropped earlier.