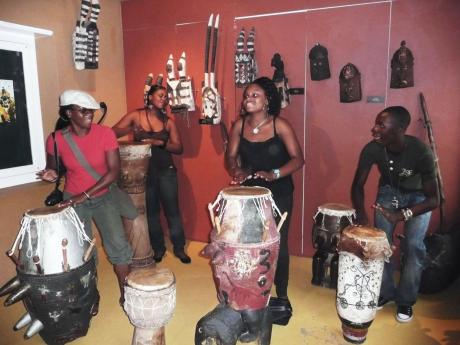 File
In this 2007 file photo, Digicel Rising Star contestants (from left) Inga Stewart, Lenya Wilks, Jodiann Pantry and Romain Virgo chant a song at the conclusion of their tour of the Kura Hulanda Museum in, downtown Curaçao.

Scores of Jamaicans have been left stranded in Curacao since March, when Dutch Caribbean carrier InselAir, which serves as the country's national airline, suspended its services to several destinations, including Kingston.

Jamaicans who want to visit family and friends in Curacao have also found themselves in trouble to get to that country as they need to transit through the United States and need a US visa to do so.

InselAir, on its official website, blamed the grounding of portion of its fleet as the reason behind the suspension, and listed Barquisimeto, Caracas, Georgetown, Haiti, Havana, and Kingston among the destinations affected.

The airline said service to Aruba, Bonaire, Curacao, and St Maarten would remain in place and regular service should resume later this month. An exact date is not stated.

With the suspension, persons are being asked to fork out up to J$100,000 for the flights through Miami or other ports.

Last week, several Jamaicans living in Curacao told The Sunday Gleaner that the suspension of flights to Kingston is the latest bout of injustice and lack of representation they face.

Bishop of the Faith Word Fellowship Ministries International Curacao Foundation, George DaCosta, a Jamaican living in Curacao for more than 20 years, said members of his congregation are among those suffering.

"It is affecting a lot of us in different ways. I have a sister who is legal here and she wanted to go home because her son was graduating and she couldn't go. She just didn't have the amount of money for the fare," said DaCosta.

He said she attempted to reach Kingston through St Maarten, but ended up having to cancel the flight.

According to DaCosta, Jamaicans who visit Curacao and those living on the island illegally are the hardest hit as they have to foot the high cost of their tickets to go back home.

"Some people are getting stressed out, they want to go back and they can't go back because they don't have the money. If you can't go back, then you stay illegal and then they catch you and put you in prison," said DaCosta.

He charged that except for an elderly national acting as consulate of Jamaica in Willemstad, Curacao, there is very little representation for Jamaicans.

"The representation here is very poor. If you want your passport, yes, you go to him and he will help it through. But there is nobody here to stand up for us and say 'these are Jamaicans'," argued DaCosta, who said that he moved to Curacao as part of an aim to establish the church internationally.

In the meantime, Karen Dacres, whose 65-year-old diabetic mother is ailing at a Golden Age home in Curacao, is fearing the worst every time her phone rings.

She has been searching without success for a route to visit her mother at a price she can afford.

"It affects me. It must affect me every day. All week me sit down here and just bawl. She have a little lady who visit her and her little granddaughter, but I go there and take care of her whenever I can. She is looking out for me," said Dacres, who last visited her mother in February.

"She not walking, she talk a little, yes, but she cannot see. She needs me but I don't have the money or US visa to go there, so I don't know," added Dacres.

She told our news team that she purchased a ticket for a flight straight to Curacao from an InselAir affiliate agency in St Andrew for her last trip.

Last Wednesday, a representative of that agency confirmed the suspension of the flights and that Jamaican passengers were indeed being impacted.

"Flights were suspended because of lack of equipment from March, and they said they are planning to come back this month, but they haven't confirmed that they are definitely coming back," said the agent who asked not to be named.