Modern methods point to concrete as most cost efficient 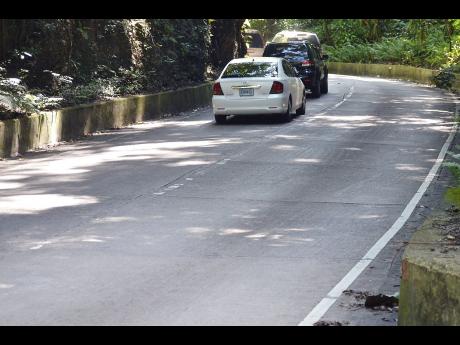 Motor vehicles travel on the concreted section of Fern Gully.

The differential cost between concrete and asphalt roadways since the turn of the 20th century has been as low as single digit, primarily because of the utilisation of the 1993 American Association of State Highway and Transportation Officials Guide for Design of Pavement Structure and other modern developments, says Desmond Young, civil engineer and a past president of the Jamaica Institution of Engineers.

In assessing the worsening state of asphalt-composition roads islandwide, Young listed the cost of oil, invention of new equipment, and the development of fibre reinforcement as factors which have seen concrete road figures plummet from as high as 50 per cent more.

"Locally, the design and placement is a new phenomenon and the reaction is almost always 'it costs more'," Young told The Gleaner, while noting that concrete has now become an integral part of the road network in major developed countries.

Since the start of the year, more than $600 million has been allocated to rehabilitate approximately 104 kilometres of roadway in Trelawny, Clarendon, Manchester and Westmoreland.

While stating that there is a place for both options, Stephen Shaw, manager of communication and customer services at the National Works Agency, told The Gleaner last week that the costly initial outlay of concrete was a deciding factor in selecting which finish to apply to roadways.

... Three per cent difference between concrete and asphalt roads

Prior to its implementation in 2015, a quotation from CEMEX Jamaica showed just a three per cent difference (US$683,550 to $701,550) for two kilometres of works carried out along the access road to the Riverton City disposal site in St Andrew.

"Additionally, since concrete reflects more sunlight than asphalt, it enhances night-time visibility, which can lead to reduced street-lighting requirements and lower energy bills," she said.

According to 2014 market intelligence from the Portland Cement Association in the United States, warm-mix asphalt (WMA) paving costs for an urban two-lane road in 2013 were estimated at US$852,238 per two-lane mile compared to US$878,513 per two-lane mile for a hot-mix asphalt roadway, or savings of roughly US$26,000.