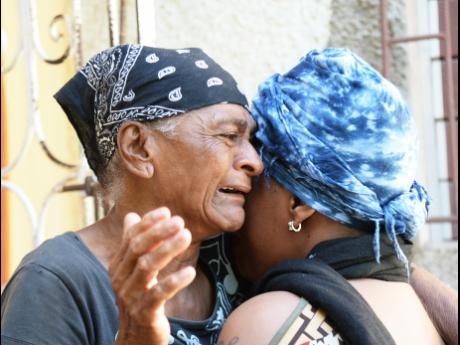 Jermaine Barnaby
Dotsy Simpson (left) is being consoled by friend Tanya Dewar yesterday, as she spoke about her sister, Maxine Simpson, who was murdered on Sunday night in the St Andrew South West constituency.

The two women clutched each other shaking, their wails deafening behind Bible verses as they mourned the killing of Maxine Simpson, assistant to Karl Blake, People's National Party (PNP) councillor for the Greenwich Town division in the St Andrew South West constituency.

"Me nuh know wah me sister do them. Lawd, only you can tell me!" moaned Simpson's older sister, Dotsy, tightly hugging their friend Tanya Dewar, in whose arms Simpson reportedly took her last breath after being shot twice, once in the head, about 8:30 Sunday night.

The incident occurred at the Caribbean Palm Estate Community Centre on Spanish Town Road in Kingston, which remained in shock for much of yesterday morning as its residents came to terms with the incident.

Simpson, who wore several caps while representing her home community Greenwich Town and surrounding areas, was shot dead by attackers who reportedly laughed and chatted with her minutes before pulling the trigger. Blake, who was reportedly shot in the upper body, was listed in stable condition at hospital.

Yesterday, Dewar and others spent much of the dawn hours washing away two bloody spots - located metres apart at the entrance to the community centre - where she said the two stood when the gunmen opened fire.

Dewar shook uncontrollably as she recounted how happy Simpson was in the hours leading up to her death.

Alleged eyewitnesses speculated that Blake was collateral damage, and that Simpson may have been the primary target of the attack. Sleuths from the Hunts Bay Police Station, however, were slow to speak to the claims hours after their investigations had began.

"We have nothing new right now. We don't have a motive. We don't have the facts," offered Senior Superintendent Arthur Brown, head of the St Andrew South Police Division, in which the Caribbean Palm community falls. Brown said he had been probing the case late into Sunday night.

Yesterday, the PNP condemned the attack, calling it a reprehensible act of violence and implored "the security forces to conduct a thorough investigation to apprehend those responsible for such a vicious crime".

The Kingston and St Andrew Municipal Corporation also described the attack as reproachful, noting that Simpson and Blake committed their lives to community development, nation building and service.