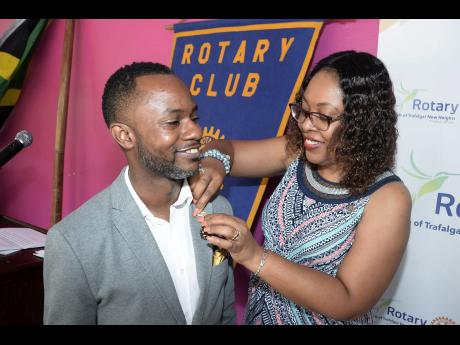 Contributed
All smiles as Gareth Manning has his president’s badge pinned on his jacket by Rotary’s assistant governor Jamaica, South-West District, Judy Hylton.

He has been working assiduously behind the scenes for the last few years, but Gareth Manning has now ascended to the presidency of the Rotary Club of Trafalgar New Heights, and has already pledged, as a major focus, to offer well needed educational support to Jamaica's physically challenged.

Manning, along with other new members of the club's executive committee, was officially installed on Sunday, during a ceremony at the C&C South Beach Cafe in St Andrew.

"I am humbled! A leadership position like this is not something that I really aspired to personally. I prefer to be in the background, but the club members really had a lot of faith in me and they thought it best for me to lead the cause this year," Manning, an experienced media practitioner told The Gleaner.

"We have a number of plans for the club this year. One of the main things we want to do is to expand our reach in respect to some of the projects we do. We want to focus on the physically disabled in particular, and children living with special needs. In fact, we have gone as far as to create a partnership with the Jamaican Association of Persons Living with Physical Disabilities, because the problem is quite grave."

Manning argued that many schools do not cater to the needs of the physically disabled, noting that many have not had the opportunity to further their education.

"What we want to do is work with that group, to help meet some of those educational needs and to meet the needs of the advocacy group itself, so that they can have the capacity to advocate on the needs of the community," he declared.