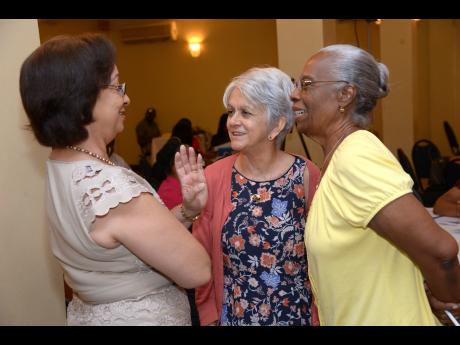 Ian Allen
Dr Maureen Samms-Vaughn (left) from the Department of Child and Adolescent Health at the University of the West Indies shares a moment with Dr Deanna Ashley (right) and Dr Elizabeth Ward (centre) at the start of the National Plan of Action for an Integrated Response to Children and Violence Workshop last Thursday.

CAMP Cornwall, a project aimed at helping children affected by violence in the troubled parish of St James, is struggling to achieve its full potential due to insufficient funds.

Designed to focus at the Cornwall Regional Hospital, CAMP Cornwall is aimed at identify and referring victims of violence for investigation and psychosocial therapy.

The project is also being designed to improve parenting skills, resolution and develop and implement an intervention model in the child's environment - home, school, churches and other areas.

"We are targeting children 3-11 years and we are hoping in the first 12 months to intervene with about 80 child victims and 500 families," said Collen Wint-Bond, the project coordinator.

"CAMP Cornwall is also extending to the teens and young adults, so for teens and youth 12-25 we will be addressing their issues as they come into Cornwall Regional with violence-inflicted wounds. We are going to be looking at about 50 youth victims and about 250 families over the first 12 months," added Wint-Bond.

But while CAMP Cornwall is being designed to run for an initial 12-month period, it has so far identified money to keep it going for only six months.

According to Wint-Bond, close to $9 million has been made available to the programme by the Citizen Security and Justice Programme (CSJP) through the Ministry of National Security.

"We have started and we have six months funding, that's barely enough to really start doing anything," Wint-Bond told The Sunday Gleaner.

"So we are really looking for funding for at least an additional 12 months because we are not just trying to prevent the violence against children and any repeat but also to get the data so we can determine the communities that need particular attention. So the data is critical and in six months you are not going to really get a significant amount."

To execute the project, one coordinating social worker, two part-time social workers and another who will work on a case-by-case basis as well as a violence interrupter will be hired.

Executive director of the Violence Prevention Alliance (VPA) which is overseeing the CAMP Cornwall project, Dr Deanna Ashley, said additional money is needed if all the objectives of the project are to be achieved.

"If I get another $12-$15 million that would take us comfortably through the year with a reasonable service," said Ashley.

"We would like to provide a different type of environment for those children as part of their resocialisation and work with the families but we need more money.

"The component that we got funding for will focus on the public education, community intervention, evaluating and tracking the children, utilising culture through music - the dancehall type of intervention to engage persons and get the message through about the importance of preventing violence - and then working with the other agencies on the ground to facilitate the referral and the linkages into other programmes."

Figures from the police high command show that 601 children were fatally shot across the island over the last 10 years, with 27 (13 males and 14 females) of these occurring between January and July 16, 2017.

"In St James, there is desperate need to do something to protect and to help our children," said Ashley.

"The physical injury is one thing and you want to fix that physical injury, but when you take out the sutures, what is left? A child is hurt, emotionally scared, mentally traumatised, and you have to work with those children and their families to ensure no long-lasting damage is done to that child and their development.

"We are focusing on St James but really and truly, every institution that has an emergency department that treats persons who come in injured from violence should have a programme like this," added Ashley.