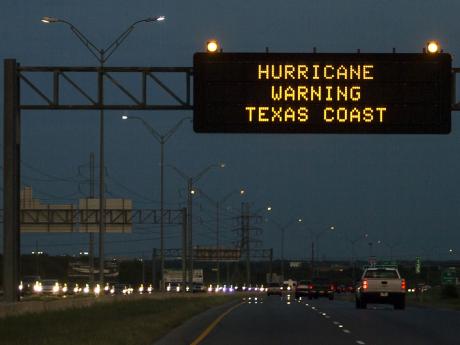 HOUSTON (AP) — Hurricane Harvey, now at category four strength, is now taking aim at the Texas coast and is expected to be one of the worst storms in just over a decade.

Here's the time line of events ahead of Harvey's landfall:

Hurricane Harvey looks to hit about the same area as one of the strongest and deadliest hurricanes to ever smack the United States: the Indianola Hurricane of 1886.

The National Hurricane Center says the Indianola hurricane ranks as the fifth strongest hurricane to make U.S. landfall, behind the 1935 Keys hurricane, 1969's Camille, 2006's Katrina and 1992's Andrew. About 150 people died, putting it in the top 25 most fatal hurricanes.

MIT meteorology professor Kerry Emanuel says Indianola was a thriving city before it was struck and it never came back. According to Texas Escapes magazine, it's now pretty much a ghost town.

Emanuel says that Harvey "is going around the same place."

More than 15,000 people aboard three Carnival Cruise Line ships scheduled to return to Galveston, Texas, this weekend face delays or detours due to Hurricane Harvey in the Gulf of Mexico. The Port of Galveston was closed Friday amid the hurricane threat.

A statement Friday from the Miami-based cruise line says the Carnival Freedom and Carnival Valour were at sea and would remain a safe distance from the hurricane. Both ships were originally scheduled to dock in Galveston on Saturday but will instead stop in New Orleans to replenish supplies.

The Carnival Freedom and the Carnival Valour each carry about 4,800 passengers and crew. The statement says they'll resume their return to Galveston as soon as possible.

The Carnival Breeze was scheduled to return to Galveston on Sunday. It's spending Friday night in Cozumel, Mexico. That ship has more than 6,000 on board. The Carnival statement said the ship would depart Saturday for Texas to be in position when the Port of Galveston reopens.

The National Hurricane Center says that sustained hurricane-force winds are about to move onshore as Hurricane Harvey nears landfall on the Texas coast.

The centre said late Friday afternoon that a sustained wind of 67 mph (108 kph) with a gust up to 81 mph (130 kph) has been reported at Aransas Pass.

Harvey is expected to make landfall overnight, bringing life-threatening storm surge, rainfall and wind to portions of the Texas coast.

Jeff Lindner, a meteorologist with the Harris County Flood Control District, said Friday that two key reservoirs in the flood control system — at the Addicks and Barker dams — are currently near-empty and are in no danger of flooding neighbourhoods close by. The district has electronic sensors installed along Houston's bayous and waterways.

Lindner did not single out neighbourhoods in Houston, saying all of the nation's fourth-largest city and its outlying areas face flooding in a storm as large as Harvey.

Houston is notoriously flood-prone and forecast to receive steady rain for several days into next week.

As Hurricane Harvey nears landfall, Harris County's top elected official says he isn't calling for an evacuation for residents of the county that includes Houston and many of its suburbs. That's despite Texas Gov. Greg Abbott suggesting people in Houston should head north, away from the Texas Gulf Coast.

Ed Emmett, the Harris County judge, says that while the hurricane is expected to dump lots of rain on Houston, the city isn't expected to receive large amounts of storm surge as well. Other communities on the Texas coast are expecting that.

Emmett said he had spoken to Abbott Friday afternoon and acknowledged residents of the nation's fourth-largest city might have got a "mixed message." But he said residents should stay put, in part because it's too early for officials to determine where the most flooding would occur.

Houston Mayor Sylvester Turner asked people in the city to stay in their homes and off the roads to the extent possible. He said there might be a "greater danger" in having people who don't need to be evacuated on to roads that could flood.

Houston officials are showing signs of frustration after Texas Gov. Greg Abbott urged anyone who can to evacuate before Hurricane Harvey arrives.

Houston Mayor Sylvester Turner on Friday tweeted "please think twice before trying to leave Houston en masse." His plea came shortly after Abbott held a news conference urging Gulf Coast residents to pack up and leave, whether or not their cities are under evacuation orders.

No evacuation orders have been issued for Houston. The mixed signals between the Texas governor and local officials are emerging just hours before Harvey is expected to make landfall as a Category 3 storm.

Abbott has repeatedly suggested since Thursday that not enough people are evacuating. But state officials also say they have no count on how many people have actually left their homes.

The National Hurricane Center says Hurricane Harvey has powered up to 125 mph (201 kph) as it bears down on the Texas coast, with its eye about 60 miles (95 kilometres) east-southeast of Corpus Christi, Texas.

The centre said in its Friday afternoon update that the hurricane is travelling northwest at 10 mph (16 kph).

Hurricane force winds are not quite ashore but are within a couple dozen miles of land. Tropical storm force winds have already been measured in Aransas Pass, Texas.

Texas officials say they have no estimates on how many people along the coast are heeding warnings to evacuate before Hurricane Harvey makes landfall.

But Gov. Greg Abbott on Friday continued insisting that too many people are staying put. He urged anyone with the ability to flee the Gulf Coast to do so but stopped short of criticising local officials who haven't ordered mandatory evacuations.

State emergency officials have identified at least eight counties and seven cities that have issued mandatory evacuations. More than a dozen others are under voluntary evacuations.

Nim Kidd is the chief of the Texas Division of Emergency Management. He says there's no good way of telling how many people have evacuated and that congested highways along the Gulf Coast are a poor indicator of whether enough families are leaving.

The White House says President Donald Trump is making plans to travel to Texas early next week to monitor the effects of Hurricane Harvey.

Spokeswoman Sarah Huckabee Sanders says the president is planning to go to Texas next week as the Gulf region prepares for the hurricane to make landfall late Friday or early Saturday as a powerful Category 3 hurricane.

The president was briefed Friday by the heads of the Federal Emergency Management Agency and Homeland Security officials on the storm.

The Trump administration is encouraging people in the path of the hurricane to heed the advice and orders of local and state officials.