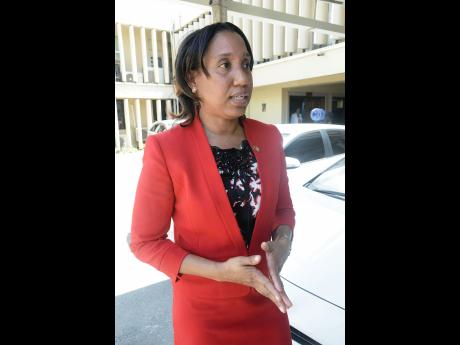 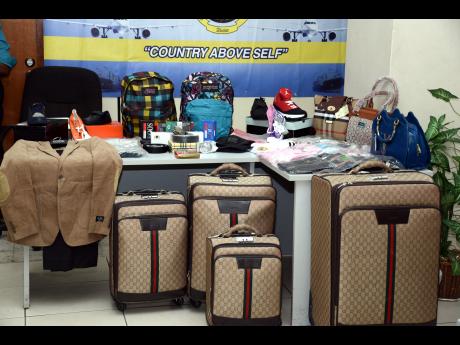 Norman Grindley
This April 2017 file photo shows counterfeit goods at the downtown office of the Counter-Terrorism and Organised Crime Branch.
1
2

Approximately $65 million worth of infringing products were successfully forfeited and disposed of by the Jamaica Customs Agency (JCA), acting on behalf of brand-holders, for the period January 2016 to September 2017.

Velma Ricketts Walker, the commissioner of Customs, told The Gleaner that backpacks/bags represented approximately $43 million of the total and that the effect of the importation of fake goods could be catastrophic for the country's fragile economy.

"The threat of international property rights infringement must not be seen as a victimless crime. It can have serious negative effect on the country's economic growth, impacting of course, the gross domestic product (GDP)," said Ricketts Walker.

"These items, not being the original goods, are cheaper, but could prove disastrous to GDP," Ricketts Walker added.

She said an additional $500 million worth of goods was seized and is to be disposed of, which points to the tough job Customs has in cracking down on the importation of counterfeit products.

"That is the difficulty some importers have. Because thinking you have purchased legitimate items, you suddenly find that they are fake. Not only do you lose your investment, but the goods will be seized and destroyed," the commissioner stated.

The JCA conducts enforcement of intellectual property rights through the utilisation of the Customs Act, Merchandise Mark Act and the Trade Marks Act.

Brand/rights holders or the authorised agents of the infringing product are required to provide the JCA with a notice to act and an indemnity.

"This indemnity serves to indemnify the agency on any cost or charges related to enforcement action undertaken. This may include legal challenges," said Ricketts Walker.

She said that the JCA acts on the behalf of right-holders. The product being infringed must be registered locally with the Jamaica Intellectual Property Office (JIPO), and proof of a valid registration certificate must be presented.

"The agency continues to encourage rights holders and engage us in the fight against infringing/counterfeit products," said Ricketts Walker.

"We also work with our law-enforcement counterparts, the Jamaica Constabulary Force, in this continuous fight. Critical to our fight against counterfeit products are the potential health and safety issues that may arise from counterfeit products such as illegal pharmaceuticals, toiletries, cosmetics and liquor."

She said that Jamaica Customs, along with the Jamaica Intellectual Property Office, must seek to educate people about the problem.

"There is a need for greater coordination and a strong preventative programme to be put in place, while we try our best in border protection," said Ricketts Walker.

"Because fraudsters are becoming more ingenious, it is making the job of identifying the fake goods that more difficult, which means that we have to be working overtime in trying keep it to a minimum, while attempting to eradicate the problem," she stated.