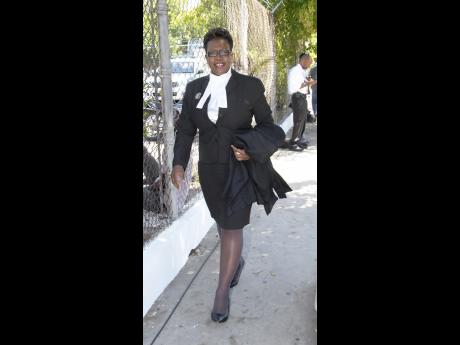 The Ministry of Finance has moved to ease the pressure on the beleaguered court system by confirming, through a letter, that the Office of the Director of Public Prosecutions (ODPP) will now be able to employ some additional staff.

The information was received by the ODPP on Tuesday after Paula Llewellyn, the director of public prosecutions, vented her frustration over delays by the finance ministry to give her office the go-ahead to fill 17 posts for which approval had already been given.

"After venting my frustration Monday morning, by Monday evening, my administrator got a call from an officer from the Ministry of Finance indicating that she was to pick up a letter (Tuesday morning). And having looked at the letter, it is speaking to the awarding of posts, coming from the organisational review," Llewellyn said as a guest on the Independent Talk show on Power 106 FM Wednesday.

The issue of inadequate staffing, which has been affecting the swift movement of cases through the legal system, was also raised by Chief Justice Zaila McCalla as the courts contend with trying to adjudicate 861 backlogged cases now before the courts.

In the meantime, Llewellyn said that she has directed her human resource department to move quickly to put things in place for the additional staffing, but noted that space limitations meant that the department could only accept five persons to fill vacancies at this time.

According to Llewellyn, the finance ministry gave approval for the hiring of 17 additional employees - 10 prosecutors and seven administrative and paralegal staff - effective April 1 this year. But now that there seems to be some level of breakthrough, her department is still facing a chronic lack of space.

"Now, I am making arrangements for persons to share offices. I can only accommodate, at most, another five," she said.

The DPP said that she is waiting for additional space as the Court of Appeal is scheduled to vacate the area it currently occupies. Llewellyn said that the plan is to get an additional 18 office spaces for new staff.

"But right now, all of us, as Jamaican people would say, are prepared to 'small-up, small-up' to make sure that I have five more legal bodies, and we'll have a couple more secretaries and a couple more paralegal staffers," said Llewellyn.