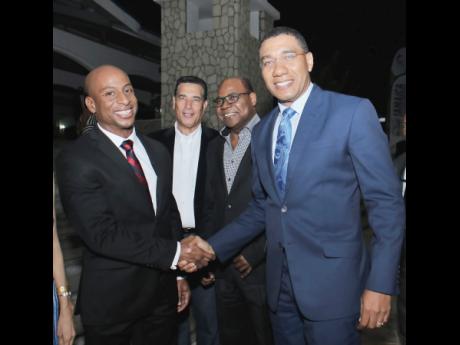 Prime Minister Andrew Holness (right) being met on arrival at JAPEX 2017 by president of the Jamaica Hotel and Tourist Association, Omar Robinson (left). Sharing in the occasion are Mayor of Montego Bay Councillor Homer Davis (second left) and Minister of Tourism Edmund Bartlett.

In the midst of the devastation caused by hurricanes and earthquakes to the Caribbean region, Jamaica's Prime Minister Andrew Holness said climate change is real, presenting a clear and present danger to countries worldwide.

The prime minister was speaking at the 27th Jamaica Product Exchange (JAPEX) opening ceremony at the Montego Bay Convention Centre in St James on Sunday night.

Expressing his concerns about development, he argued that the right balance must be found, so that infrastructural growth is not at the expense of the environment.

Addressing the challenges of the country's sister islands that were recently devastated by hurricanes Irma and Maria, Holness noted that in some cases tourism was the single industry, while in many cases a major industry in those islands.

He, however, cautioned, "This time they must factor in disaster resilience, recovery and adaptation in a systematic and institutional way. The world has been forced to acknowledge that there is urgent need for responsibility, adaptation and resilience as we recognise our changing realities. Climate change is real and it will disproportionately affect those of us who are least prepared to respond".

Pointing to the importance of the November 27-29 upcoming United Nations World Tourism Organization (UNWTO) sustainable tourism conference, set for Montego Bay, Holness said this was one of the best platforms to look at issues affecting the environment and the sustainability of the industry.

The conference is being staged in a year designated the International Year of Sustainable Tourism for Development.

The prime minister's statements come in the wake of the appointment of the country's tourism minister, Edmund Bartlett, as head of the task force that will lead the UNWTO Disaster Recovery Programme.

Bartlett said a presentation would be made at the State of the Tourism Industry Conference (SOTIC), being staged in Grenada from October 9-13.