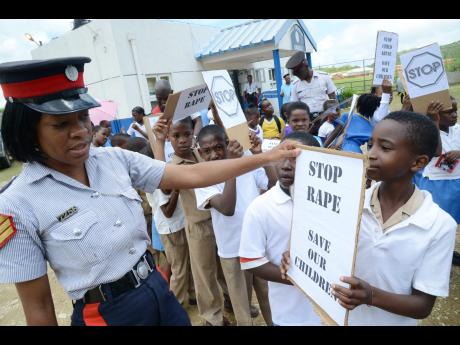 Rudolph Brown
A police seargeant gets reay to join children in a march against the sexual abuse of children. 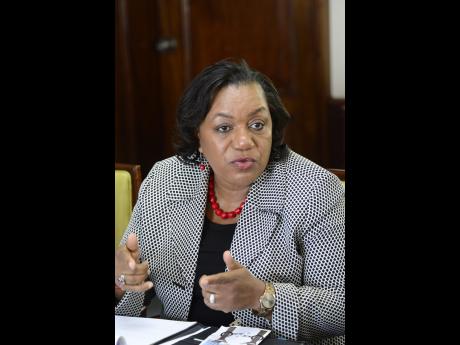 One in every three wards of the State, in two of the island's residential childcare facilities, tested positive for at least one sexually transmitted infection (STI) during a study done two years ago.

The Child Health and Wellness Study in Residential Childcare Facilities, which was commissioned by the Child Development Agency (CDA) in collaboration with the National Family Planning Board (NFPB) through funding from the United Nations Children's Fund (UNICEF), found that the average age for first sexual intercourse was 11 years and four months.

Just over 50 per cent of the girls surveyed in the study said they had agreed to sex on the first occasion, while 36 per cent claimed that they were forced. Twenty per cent also reported a history of pregnancy.

"Originally, we tested 60 young ladies (19 tested positive for an STI) but when we looked at the results it called for a little bit more intervention so we ended up testing 120 (additional 60) young ladies," Andrea Campbell, director of health promotion and prevention at the NFPB, told The Sunday Gleaner.

"The follow-up 60 showed more cases of multiple STIs; persons having more than one," added Campbell of the study that was intended to describe the health status of the children within the two childcare facilities and explore the factors which may contribute to their sexual and social vulnerabilities.

"Following up on the study, and having worked with the staff at the facilities, we decided that there was the need for a life skills programme looking at all of these issues. In order to carry out this programme and make it effective, we had to do some training with the staff as well as to sensitise the girls.

"And after this training we developed a manual that the staff in the facilities would use in working with these children. The manual was railroaded by the Jamaican Coalition for a Healthy Society, who thought we were sexualising the girls by giving them the information, which in my humble opinion would have actually been helping them to make informed choices," argued Campbell.

In commenting on the findings of the study, head of the CDA, Rosalee Gage-Grey, told our news team that the prevalence of STIs among the girls who were tested at the two facilities is not surprising as the majority would have come into care with sexual-abuse issues.

According to Gage-Grey, with the extent of sexual abuse in the country as high as it is believed to be, the prevalence of STIs among children in wider society could be a significant problem.

She argued that the issues with the law and policy in providing reproductive health information to children needs to be resolved.

"At some point we have to come to the realisation that the children need the information to make informed decisions," said Gage-Grey.

"We have to go with the law, but there has to be some level of agreement as to how we are going to treat with this serious problem that we are having with children who are being coerced and initiated from a very early age to understand the issues.

"Part of the challenge is that if a child says he/she has not been sexually abused you cannot examine them even if they had been deemed to be sexually active," noted Gage-Grey.

In an aim to tackle this challenge, the CDA is looking to work with the Ministry of Health to see if, in addition to the usual back-to-school medicals, from an ethical perspective, additional medical checks can be done for things such as STIs.

The Childcare and Protection Act (of 2004) makes every citizen legally responsible for reporting to the Office of the Children Registry (OCR) any knowledge or suspicion that a child "has been, is being or is likely to be abandoned, neglected or physically or sexually ill-treated".

Persons who fail to do so, upon conviction before a resident magistrate can be fined a maximum of $500,000 or to imprisonment to a term not exceeding six months, or to both such fine and imprisonment.

But Campbell is concerned that this law which is intended to protect children could be doing some harm as it has made health-care workers, who are "prescribed" persons mandated to report to the OCR, fearful of offering assistance to minors.

"So if a young girl comes in and says she is sexually active and would like to access contraceptive, do I send her home for her parents?" questioned Campbell.