Cruise ships displaced by storms to call on Grenada 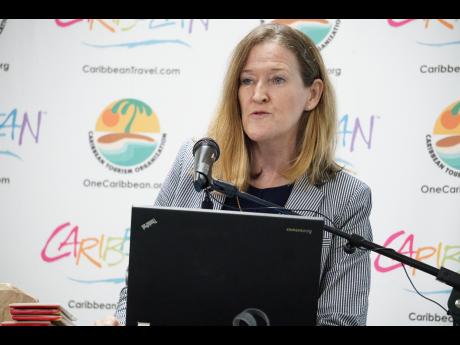 A total of 28 additional cruise ships will dock in Grenada, owing to displacement from other Eastern Caribbean ports damaged by hurricanes Irma and Maria.

The island received the first vessel last Tuesday, the Carnival Fascination, which was scheduled to dock in St Thomas in the US Virgin Islands.

The cruise lines are Carnival, Costa, P&O (formerly Peninsula and Oriental), Seabourn, Wind Star and MSC, says CEO of the Grenada Tourism Authority, Patricia Maher, while addressing the media at the State of the Tourism Industry Conference (#SOTIC2017) at the Radisson Beach Resort in St George's yesterday morning.

"We received the first of the extra cruise passengers last Tuesday and we made sure to welcome them properly to the island. They left here singing our praises," she stated, adding that Grenada was not celebrating the loss of its Caribbean neighbours, but it was important to note that, originally, the passengers had not booked Grenada.

"The onus was on us to ensure their visit was memorable."

On the other hand, tourism officials on the island, which will open its first luxury hotel in 25 years, the Silver Sands at Grand Anse Beach, say between January and September, there was a 13.37 per cent (46,010) increase in stayover arrivals from the US when compared to the same period in 2016 (40,583).

The Canadian market is also improving, although not in double digits.

For the first eight months of the year, the country welcomed 100,815 stopover visitors.