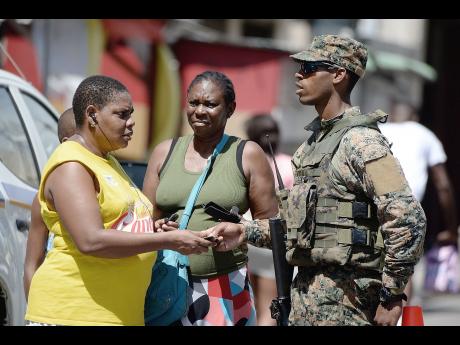 Lionel Rookwood
These residents of Denham Town show a Jamaica Defence Force soldier their identification in Denham Town, Kingston, after it was declared the second zone of special operations yesterday. 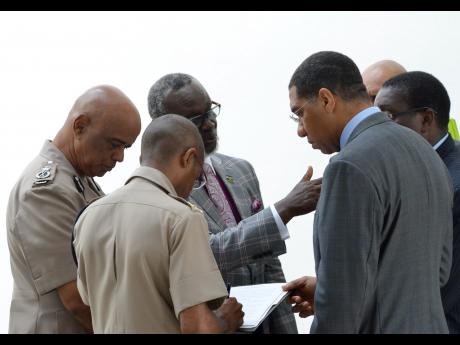 Twelve gangs wreaking havoc in Denham Town have been cited as the reason for the west Kingston community being declared the second zone of special operations (ZOSO).

Prime Minister Andrew Holness made the announcement yesterday during a press conference held at the Office of the Prime Minister.

area from 5 a.m. yesterday to 5 a.m. tomorrow, as a police-military team, led by Senior Superintendent Everal Linton of the Jamaica Constabulary Force and Lieutenant Colonel Murphy Pryce of the Jamaica Defence Force taking control of the area.

Holness stated that several other communities do, in fact, meet the first-order criteria.

However, for strategic reasons Denham Town was selected.

"Since 2015, there has been gang conflict between Tivoli Gardens/Young Generation Gang and the Denham Town Coalition as a result of the coalition's refusal to conform to the Coke family's regime, which has resulted in several murders, shootings and robberies," Quallo said.

"The ongoing gang feud has resulted in increased violence in the area which directly affects the free movement of residents and also has a negative impact of economic and social activities within the communities and surrounding areas."

Quallo further revealed that the violence producers are generally dons and top-tier gang members who dominated the communities through illegal activities such as extortion, armed robbery and contract killings.

"Since the shooting and injuring of Leighton Coke, o/c 'Livity', allegedly by members of the Scream Corner and Rich and Famous Gang, there have been several reported incidents, especially between July and August of this year."