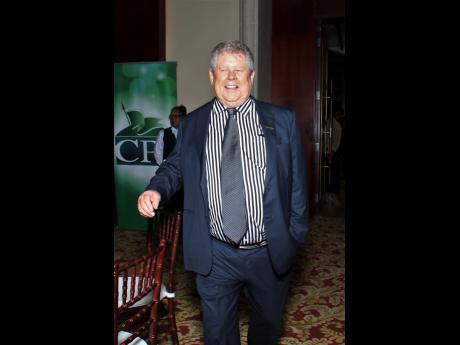 Ashley Anguin
Chairman of Sandals Resorts International Gordon 'Butch' Stewart, a short while before he was announced as the first recipient of the prestigious 'Pioneer Award' at the RJRGLEANER Communications Group Hospitality Jamaica Awards last night.

Stewart, who founded Sandals Resorts in 1981, is widely acclaimed as the 'King of All-Inclusive Resorts' for his pioneering work in transforming Sandals into the largest chain of all-inclusive resorts in the Caribbean over the past three decades.

The Pioneer Award, which was being handed out for the first time in the annals of the Hospitality Jamaica Awards, adds to an impressive list of awards which Stewart, who is chairman of Sandals Resorts International (SRI), the parent company of Sandals, has garnered over the years.

The awards previously won by Stewart include: The Martin Luther King Jr Humanitarian Award in 1992 in recognition of his efforts to advance humanity; the Travel Man of the Millennium award in 2000, for his work in promoting Caribbean tourism; and the Order of Jamaica, for his enviable contribution to nation building.

"We want to acknowledge your leadership, not just as the premier entrepreneur in Caribbean tourism, but more so for your long-term vision and dogged determination to create brands that are recognised internationally. Brands that are now known for their excellent product and unmatched service that had their genesis in Jamaica," said Hospitality Jamaica's coordinator Janet Silvera.

"It is for this reason that Hospitality Jamaica is proud to present the first award of this kind to the undisputed leader and innovator in an industry that has become the lifeblood and pinnacle of all industries in the Caribbean," added Silvera.

In addition to the award to Stewart, there were 18 other awards to individuals and organisations, that have collectively added high-quality value to the Jamaican hospitality landscape.

Of significant interest was the Hospitality Personality of the Year, which was shared by John Byles and Marc Melville of Chukka Caribbean Adventures.