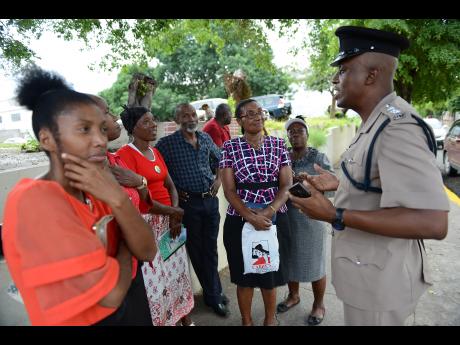 Ricardo Makyn
Deputy Superintendent of Police Linval Phoenix addressing a group of protesters outside Gordon House prior to last Friday’s meeting of the Senate for the discussion of the legislation to establish the National Identification System.

With 100 amendments made to the National Identification Registration Act in the Lower House, Dr Floyd Morris and his fellow opposition senators raised eyebrows at the start of last Friday's sitting of the Upper House when they discovered that in addition to 23 pages of amendments introduced the previous week, another three pages of corrections were tabled.

Morris urged Leader of Government Business in the Senate Kamina Johnson Smith to suspend the debate on the bill, which will establish the National Identification System (NIDS), to allow him to review the amendments and be able to make a more meaningful contribution at the committee stage.

Responding to the request, Johnson Smith said: "I have heard the concerns of Senator Morris, certainly, it would not be intended to breach any privilege of the senator or any other senator.

"Senator Morris, having recently completed your PhD and having also written your autobiography, I hesitate to think that it would be too much to ask for us to work through them together."

"I think it is really out of place for the leader to say something like that. The member has raised a personal privilege, which in his mind has been abused by the operation. Now it is immaterial whether he has just completed his PhD and whether it is difficult for him to reconcile the amendments. It is of no moment.

"When one thinks of the privilege motion, in my mind it is subjective, it is specific to the individual, and so I ask, therefore, that consideration not be made about the 20 of us who are able-bodied but the one who is differently abled," said Fraser Binns.

Morris also chided Johnson Smith: "I take objection to the reference because I can't understand what relevance or what moment does the issue of my PhD has to do with the list of amendments that are there."

Johnson Smith replied: "I withdraw. If any offence was caused that was not my intention, I really just wanted to express it is not a complicated set of amendments that have been proposed, and I don't think it would be difficult for us to be able to manoeuvre the document."

She said that the government side suspended debates in the past to accommodate Morris, as she argued that "this time we are time bound".

A strident senior opposition senator, K.D. Knight, said he went through the bill "from beginning to end", spending hours to finalise his preparations, only to see amendments proposed to the areas he had studied. "I was handicapped," he added.

He said Johnson Smith had the document in time to allow her to be prepared. "Why is it that I am being denied the opportunity.

"You are trying to prevent me from being able to speak on behalf of the Jamaican people.

"When you deny me that you make a mockery of my rights, and in terms of the operations of the Senate, it is brought into disrepute."

Debate on the National Identification Registration Act was suspended at 1:18 a.m. yesterday after close to 15 hours of deliberation.

Consideration of the bill at the committee stage will resume tomorrow morning.