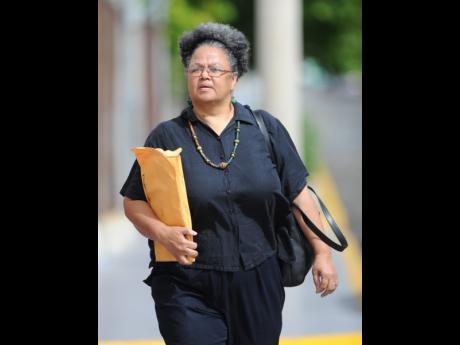 Ricardo Makyn
Susan Goffe, of Jamaicans for Justice, on her way to Gordon House for the sitting of the Senate last Friday.

Member of the lobby group Jamaicans for Justice, Susan Goffe, has described as backward the operations of Jamaica's Houses of Parliament after police personnel and the marshal to the Houses ruled that she could not take notes in the visitors' gallery without permission from the president of the Senate.

She told The Sunday Gleaner that she challenged the order of the police, explaining to them that the Standing Orders had been revised in the past to allow for visitors to the Senate to take notes.

"I have the documentation of the Standing Orders committee meeting and the resolution. The marshal is telling me ... that it was revised last year and that it is now only with the permission of the president of the Senate that you can take notes in the gallery," said Goffe.

"Now in 2017 are we really to understand that as citizens of Jamaica coming to our Parliament to monitor a debate, the proceedings in our Senate, we cannot use pen and paper to take notes when in fact the proceedings of Parliament are being broadcast live by the Public Broadcasting Corporation," added Goffe.

She continued: "What is the danger of taking notes in one's Parliament? I am certainly going to enquire to get a copy of these revisions and the reasoning behind it because it makes absolutely no sense whatsoever. None."

When senior opposition senator K.D. Knight rose to participate in the debate on the bill, he referenced Goffe's encounter.

"On my way in this morning (Friday) to this building, a citizen seemed quite disturbed, and it was that some persons in authority downstairs they were telling the citizen that notes cannot be taken in the gallery," said Knight.

President of the Senate Tom Tavares-Finson said the matter was brought to his attention but he did not know the origin of the rule that would prevent any visitor from taking notes.

"Apparently (it) requires permission from the president and I have given carte blanche in relation to that," said Tavares-Finson to loud banging on the desks from both sides of the House as senators expressed support for his ruling.

(EDITOR'S NOTE: In a previous version of this article Susan Goffe was incorrectly identified as an attorney.)