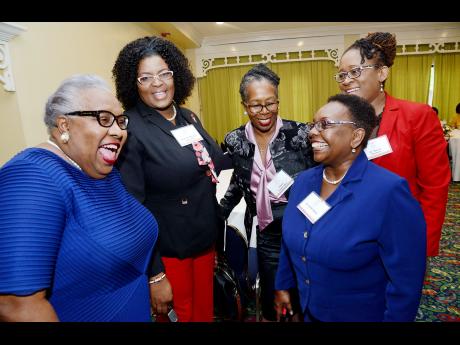 Maxine Henry-Wilson, commissioner of the Jamaica Tertiary Education Commission and former education minister, sought to caution policymakers and leaders to do more to lift gender stereotypes and empower girls to venture into innovative professions.

"The fact is, when you have the feminisation of a profession, invariably, it becomes valued less. Teaching is one of those professions that has become feminised, so is nursing and the civil service. If you do a comparative assessment of salaries, incentives and social status, feminised professions tend to be undervalued in terms of those criteria than would others.

"Soon doctors and lawyers are going to fall in the same category because more women are graduating as doctors," Henry-Wilson told a group of educators at the 2017 Women's Leadership Conference, which was hosted by the Jamaica Teachers' Association yesterday at Knutsford Court Hotel in St Andrew.

"We, therefore, have to think about how we empower our girls for them to feel that they can take on some of the new professions. They have to be the engineers, they have to be responsible for artificial intelligence jobs, they have to take on robotics, because this is where the world is trending."

She said a critical start to such development has to begin with school curricula, which will create an avenue to educate students on new and emerging professions.

"We have to be careful of how we stereotype and how it then translates itself into other kinds of incentives and awards. In areas like construction, there are far more males than females, and it talks about how we empower our daughters," said Henry Wilson.

So even though we say we do everything in our power to ensure that we don't have any gender barriers in terms of development of the curricula, we have to watch those signals that then lead to fewer women being in sciences and engineering, which is where the world is trending."