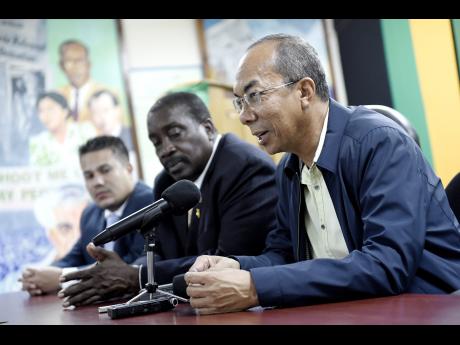 When Jamaica Labour Party (JLP) supporters meet tomorrow for their 74th annual conference, party officials are expecting Labourites to turn out in large numbers to celebrate the recent by-election victory in South East St Mary, which has increased the party's majority in the House of Representatives.

JLP officials outlined plans for the public session at a press conference yesterday at its Belmont Road, St Andrew, headquarters.

"The conference, therefore, is a celebration. We haven't had conference for the last two years as on both occasions, conference was postponed for political issues," said General Secretary Dr Horace Chang.

"We expect a very strong turnout of our supporters, despite the pressures on the budget, and look forward to an outstanding conference."

Being held under the theme 'Partnership for Prosperity', he said that indications to the party are that the spirits of Labourites are high.

"The party's programme, which we will be highlighting, is how we prepare the country in fulfilling our Vision 2030. Jamaica needs to achieve the objects set out in that vision. The JLP is committed to taking the country in that direction and expects to achieve the targets set out to make Jamaica the place to want to work, live, and raise our families," said Chang.

Other issues they plan to address include business, youth, and gender.

"Since the October 30 by-election in three constituencies, one of which was won by the JLP, the party has been dissecting its campaign strategies in the run-up to the elections," said JLP Chairman Robert Montague.

"We have had our debriefing, some of the highs and lows, some of the errors we made. We have looked at the best practices, the winning strategies, how we can improve, and where we ought to tighten. In addition, we are looking to complete the work in our constitutional reform."