Concern over cops' 'sick out' in St James 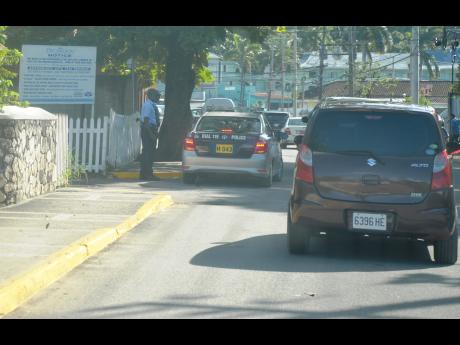 Already forced to carry out the day-to-day operations without the requisite manpower, the islandwide 'sick-out' by members of the Jamaica Constabulary Force (JCF) has left stakeholders in western Jamaica concerned that things could take a turn for the worse if an amicable solution is not arrived at soon.

"Over the Christmas holiday, and even this morning, the usual police presence to assist with the traffic flow was not there, and it is a cause for concern," Gloria Henry, immediate past president of the Montego Bay Chamber of Commerce and Industry, said yesterday.

"That impacted movement greatly, even coming into the Freeport business district, which is dominated by companies in the BPO (business process outsourcing) sector," added Henry, who is president of the Business Process Industry Association of Jamaica.

"So the impact is already evident, and I do hope that this issue will be resolved in short order so that we can go back to normalcy."

The police and the Government are locked in a wage negotiation for the 2017-2019 contract period.

The Government has twice offered the police a six per cent increase over the two-year period, but the offers have been rejected both times.

In the meantime, more than 30 per cent of the crime fighters in the problematic Westmoreland division did not report for work yesterday, but the Reverend Hartley Perrin, custos rotulorum of Westmoreland, said this was not reflected in the security forces' ability to maintain law and order.

"The shortage of police is augmented by the soldiers, and this seems to be working well. In fact, things have been improving because most of those individuals responsible for creating mayhem in the parish are now behind bars. However, it is in our best interest that the rank-and-file cops and the Government reach some agreement."

However, renowned Montego Bay businessman and chairman of the Tourism Enhancement Fund Godfrey Dyer sees no reason for concern. In fact, he believes that the security forces did well during the Christmas period.

"This does not seem to be affecting us, fortunately, because crime has not increased, but we have to keep our fingers crossed so that things do not get out of hand," Dyer said.

When quizzed on the impact of the notification from the United States Embassy in Kingston on bookings for stay-over arrivals, Dyer said: "There is no impact just yet because every hotel is running at 100 per cent capacity at this point."