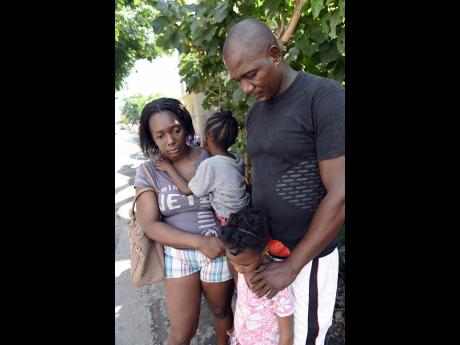 Norman Grindley
Mark Brown and the mother of his two children, Tenice Pink, are a picture of desolation following yesterday's fire on Slipdock Road in East Kingston 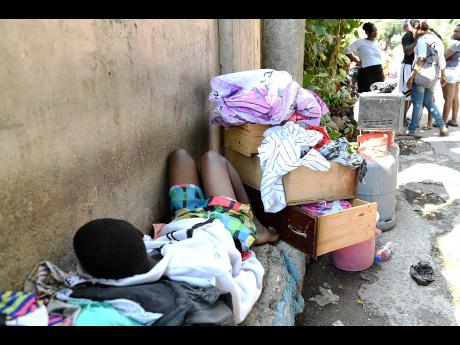 Norman Grindley
A resident sleeps on pieces of clothes salvaged from a fire that gutted a tenement on Slipdock Road in East Kingston on Monday January 1, New Year's Day.
Norman Grindley 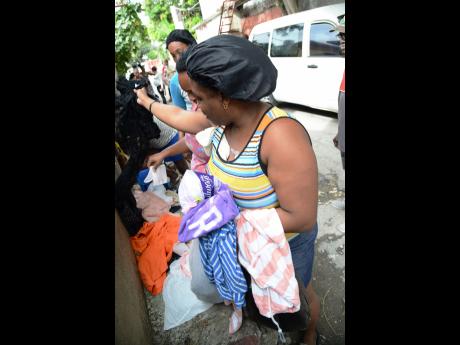 Rudolph Brown
These women have made their selection from the boxes of clothing that were donated to victims after the fire.
1
2
3
4

It is a memory that to this day brings shock and trauma. However, the residents of Slipdock Road in east Kingston who were victims of a massive fire on New Year's Day still managed to laugh and be cheerful as they expressed themselves during a counselling session that was hosted by the Child Protection and Family Services Agency (CPFSA).

The residents, who all gathered at the CPFSA's offices in downtown Kingston yesterday, were actively engaged in relaxation activities from dancing to meditation and sharing sessions. They did not hold back in

sharing their fears and concerns, especially with the reopening of school next week. They were, however, resolute that they would forever be grateful to God and find ways to get back on their feet.

"Everything was hard, trying to escape and the fact that mi lose a lot of things. All now, mi can't tell you how mi get over the balcony. It was frightening, shocking, and I was very confused. But mi a give thanks. Me and mi kids alive, and I am so happy for that," Kadian Robinson told the counsellor.

Keneita Samuels then chipped in: "A two option we did have. Either we get injured or we dead, and mi did decide that I'm going to survive.

"I was on the phone, and mi hear like somebody was throwing something on the roof, and mi just start think survival. I was on the third floor, but I found every way to make it out, and I really have to thank God."

It was a more sombre mood among the teenagers who were separated from the adults. Many indicated that they continued to have sleepless nights and were unable to eat.

Raquel* shared that in addition to the New Year tragedy, she had been trying to cope with a frightening incident that almost claimed the lives of her parents.

"Before I took my exam, my parents met in a very serious accident. So right now, my mother is very ill and mi father still not 100 per cent, but he's better, and then this happened," she said.

Another teen admitted that the thought of going back to school was daunting but said that she was going to push through the hurdles, having seven Caribbean Secondary Examination Certificate subjects to prepare for.

"If it was left to me, I wouldn't go (school), but I have no other choice, and I am going to try my best to be successful."

In the meantime, Robert Williams, regional director for the southeast region at the CPFSA, said that he was encouraged by the residents' optimism despite the tragedy.

"I was heartened to see that they would smile. Even with the bruises on their bodies, they still tried to be optimistic. Also, you see that they are bonding together and they are looking out for each other as they face the hurdles," he said.

"I was also impressed with their responses. A number of residents are here. It is evident that for them, it is not just about getting a back a TV and a bed, but they recognise that their emotional well-being is just as important."