12 children among 16 homeless as house collapses 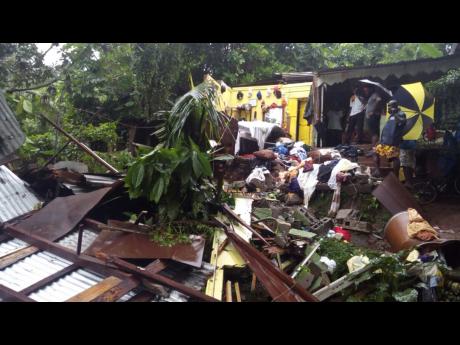 Gareth Davis Sr
The collapsed section of the house.

A family of 16 persons, including 12 children, are now homeless, following the collapse of a section of a house in Breastworks, Portland, yesterday morning during heavy rainfall.

Sixty-two-year-old Yvonne Brown was awakened by strange sounds shortly after 4 a.m. and went to investigate. She quickly realised that cracks were appearing on the outer walls to a room and veranda and alerted her common-law husband.

"We quickly exited the house, and shortly after, the veranda and a bedroom collapsed," Brown recounted.

She continued: "It could have been worse, and if there was any delay on our part, lives would have been lost. My home is destroyed, but it can be replaced. Picking up the pieces is going to be difficult, but thank God, there was no loss of life."

Overnight rain, which triggered earth movement, resulted in the collapse of the six-bedroom concrete house. Twelve children between the ages seven and 15 might not be able to attend school this morning, as all their personal belongings, including uniform, shoes, books, bags, are covered in rubble.

Yesterday, during the heavy rainfall, Member of Parliament (MP) Dr Lynvale Bloomfield visited the area and handed out food items and emergency supplies to the affected family.

And more cracks are appearing on the remaining section of the house, which has triggered renewed fears among the family.

"It is a sad day in Portland and especially for this family," said Bloomfield.

He added: "Forty-eight hours of heavy rainfall is taking its toll on this eastern parish. Several roadways are blocked in the Rio Grande Valley, pipelines have been washed away, and roadways in the eastern end remain inundated. There is no access into the upper Rio Grande Valley, and based on reports received so far, dozens of residents are now marooned."