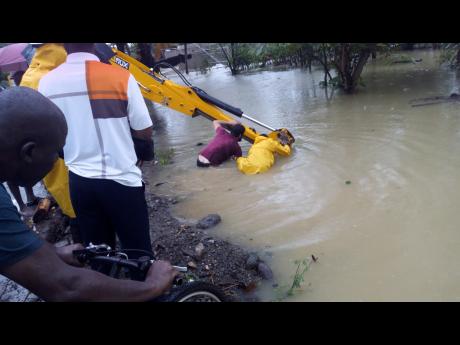 Angry residents yesterday blocked the main road leading from Anchovy to Folly in eastern Portland after murky water from a sewage treatment plant inundated their homes.

The residents, who reportedly woke up yesterday morning and encountered water in their houses, used old furniture, boulders, and fallen trees to block the main thoroughfare from as early as 7 a.m., which resulted in vehicular traffic coming to a halt.

"All my furniture and electrical appliances have been damaged," commented Stephanie McLean, a resident of Anchovy Gardens.

She continued: "I have been living here for almost 23 years, and it is the first time that any of us have suffered from flooding. The three sewage tanks that were built recently have contributed to the flooding, as the water has nowhere to go, resulting in it backing up into our homes."

The three sewage tanks mentioned by the resident were built by Vinci construction company as part of the final phase of the $1.6-billion water, drainage, and sewerage project in Port Antonio.

The more than eight families that were affected by the flooding as a result of several blocked drains constructed by Vinci were not anticipating a good night's sleep yesterday, as their beds and other upholstery are covered in mud.

Additionally, the residents argued that the murky water is unable to flow to the stretch of property near to their homes, from which it would recede over time.

Member of Parliament Dr Lynvale Bloomfield told The Gleaner yesterday that the drains constructed by Vinci are probably unable to handle the large volume of water, which resulted in the flooding.

"Clearly some engineering work will have to be done to correct this situation," said Bloomfield.

He added: "This area is at sea level, and therefore, this particular corridor will experience flooding. Previously, the flood waters would occupy most of this property and seep into the sea. However, the three sewage treatment plants form a barrier, which backs up the water into several homes. It is really unfortunate, and with the rain continuing, it could very well get worse. Most of those affected are without food, and therefore, I will be providing them with assistance."