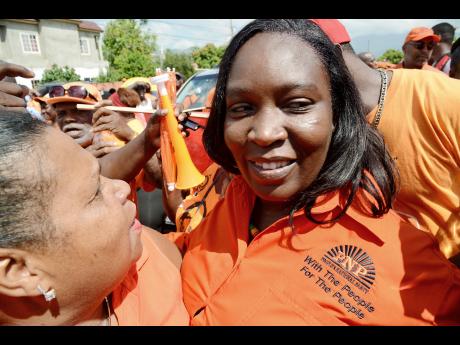 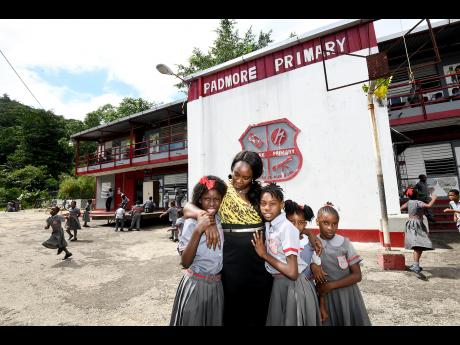 Norman Grindley
'Keisha the Teacher' with some of her students at Padmore Primary.
1
2

She had less than one month to prepare for her first examination in representational politics, which was the gigantic task of taking a seat the People's National Party (PNP) has not won since 1980.

When the grades were delivered last Monday, school principal Keisha Hayle had been marked 'fail' in her bid to win the St Andrew North West seat, but she could stand proud as she received high marks in many of the core areas.

Hayle scored above average for her interaction with residents, her ability to share their concerns, her seeming commitment to improving their lives, and her ability to decrease the Jamaica Labour Party's (JLP) margin of victory when compared to the 2016 general election.

Following the final vote count, the defeated but undaunted Hayle told The Sunday Gleaner she was going nowhere as working in the constituency was a commitment, not a promise.

"I experienced so much during the campaign, it's too much to list, but being among the people has given me some insights, and now I can better address and speak about issues of the people and the constraints that they have," said Hayle.

She added that it was an honour walking among the people as she wanted to know the constituents on a personal level.

One of the many things that Hayle is thankful for is that the people opened up to her and let her into their lives.

"The experience has made me a more rounded person. It has made me a better person, and although I didn't spend much time with my immediate family, I have found a new family with the people of North West St Andrew," said Hayle, who did walk-throughs, attended church services and parties and joined with constituents shovelling dirt from sidewalks.

According to Hayle, she discovered a feeling of hopelessness in the constituency, as over the years there has been a lack of proper representation, lack of opportunity for the youth, lack of care for the elderly, lack of recreational space or proper maintenance of what is there.

Hayle said she will stick with constituents and work with the people to build stronger communities and to undertake projects that engage the youth and transform lives.

The PNP standard-bearer said she will use the information she gathered on the campaign trail as a blueprint for what is ahead, as she now has the knowledge that can create a base from which to operate.

She noted that she gave the run her heart and some 2,800 constituents gave her their votes, but this was not enough to get her in the winner's circle as the JLP's Dr Nigel Clarke polled some 4,400 votes.

When she was named the PNP's candidate for the by-election, three weeks before the race, the small-school principal was determined to win the seat long held by JLP's stalwart Derrick Smith.

Turning the green seat orange was a mammoth task that only the brave would undertake, but Hayle is not unaccustomed to taking on difficult situations.

She had earned national accolades for her success at taking a failed school in the Red Hills area of St Andrew and turned it success.

PNP president Dr Peter Phillips knew of Hayle's potential and recognised the discipline and determination in the schoolmistress.

But a small school with fewer than 200 pupils can hardly be compared to a constituency of some 30,000 voters and a well-financed JLP machine.

The JLP had vowed that Clarke would have increased the margin of victory from the more than 2,000 Smith won by in 2016, but this was not to be, as the dogged Hayle was determined to turn the tide even when the cash-strapped PNP poured only a small morsel into her campaign.

"They couldn't celebrate that victory. After holding the seat for 28 years and with the prime minister campaigning with the resource of the country, I still managed to narrow the gap," said Hayle.